One of the most important problems of modern architecture in Russia is considered the lack of identity. Nowadays, Russian architects often imitate contemporary colleagues from other countries. As a result, national identity is completely absent in the newly created environment. New objects, erected even in an open field, have also been designed for several decades without realizing that they belong to the national culture.

The architects of the Moscow bureau Megabudka carried out research and, as a result, developed their own vision of the New Russian Style.

The created architectural style is not artificial, but is based on rethinking the cultural and value aspects inherent in the national architecture and mentality. The approach was developed with the participation of a number of modern designers and architects, systematized and turned into a determinant of Russian design. This helps not to go beyond the flexible interpretation of the combination of two concepts: avant-garde and tradition. Here the avant-garde is a completely international style, while the traditional is a woodcut, a semblance of brutal, magnificent and excessive.

The first structure, built in the new Russian style according to the project of the architectural bureau Megabudka, is located in the Lipetsk region, in the Kudykina Gora (translating from Russian: Mountain of Kudyk) park. Before the construction, the owners had been developing the park together with the bureau for several years. The idea of a "rethought national identity" is laid in the foundation of development. Any object: logo, mascot, food, font, planning principles, architecture and the like, appears in the park only if it meets the general concept of identity.

One of the most important primary transformations was the construction of a circular route along the park's borders for pedestrians. Here, the visitor can admire the untouched landscape, his path passes through the most important points of attraction of the park. Read more here.

The Hospitality Center building complex is located at the starting point of the circular route, when entering from the public car park. The circular route through the park begins from here, and the complex guides visitors to choose the direction of travel without additional navigation. To enhance the effect, the first block of the building is turned towards the predicted movement of guests. The buildings are shifted relative to the central axis of the entrance so as not to block the perspective view of the iconic landmark of the park - the Fortress. 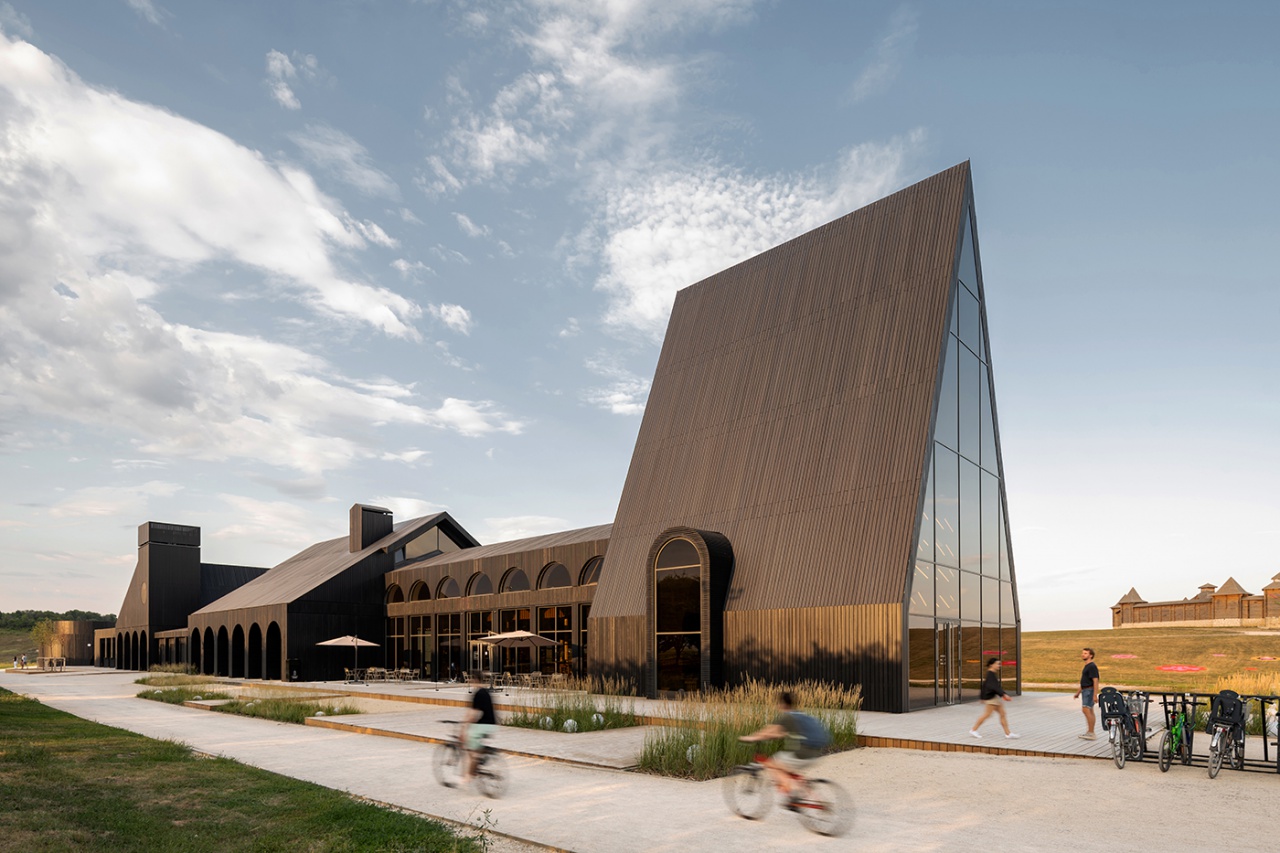 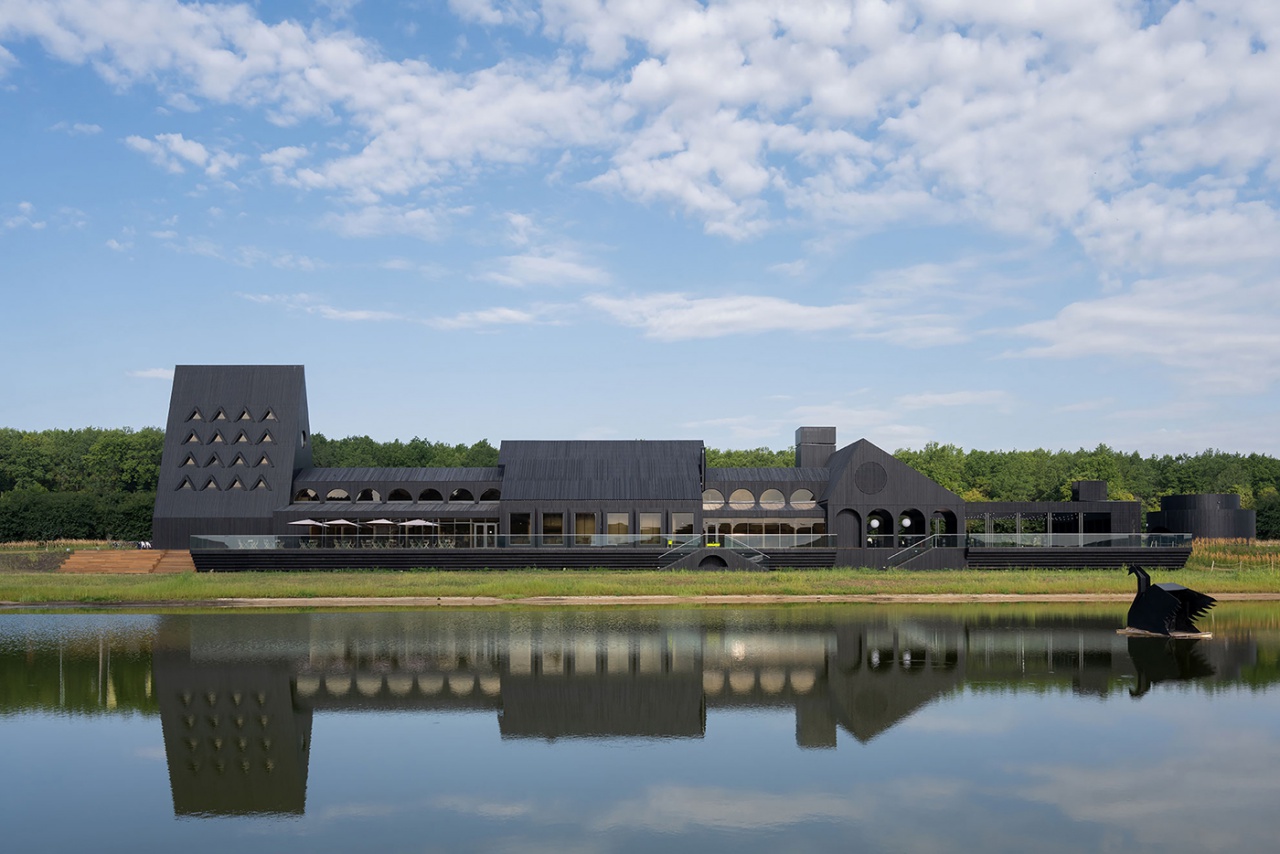 The complex consists of separate blocks of different height. Each volume has its own function. The volumes form a cozy, comfortable-scale building front, reminiscent of a fragment of a street in the old city. In the future, it is planned to complete the construction with the next blocks of different functions. This will complete the composition of the entire complex and will allow the owners, together with the bureau, to think over the best strategy for responding to the possible requests of park visitors.

All blocks stand on a single stylobate, they are united by a wooden terrace on the roof. The high stylobate part is given over to technical and storage spaces and is partially hidden in the relief. Thanks to the use of relief differences, the terrace becomes an observation platform from which dramatic vivid views of the pond, the fortress and the fire-breathing sculpture of Gorynych (a folk hero of Russian fairy tales) which is one of the main attractions of the park, open up. The obtuse shape of the stylobate hangs over the tall grass, resembling the Ladya (a sailing-oared river vessel used in Ancient Rus). 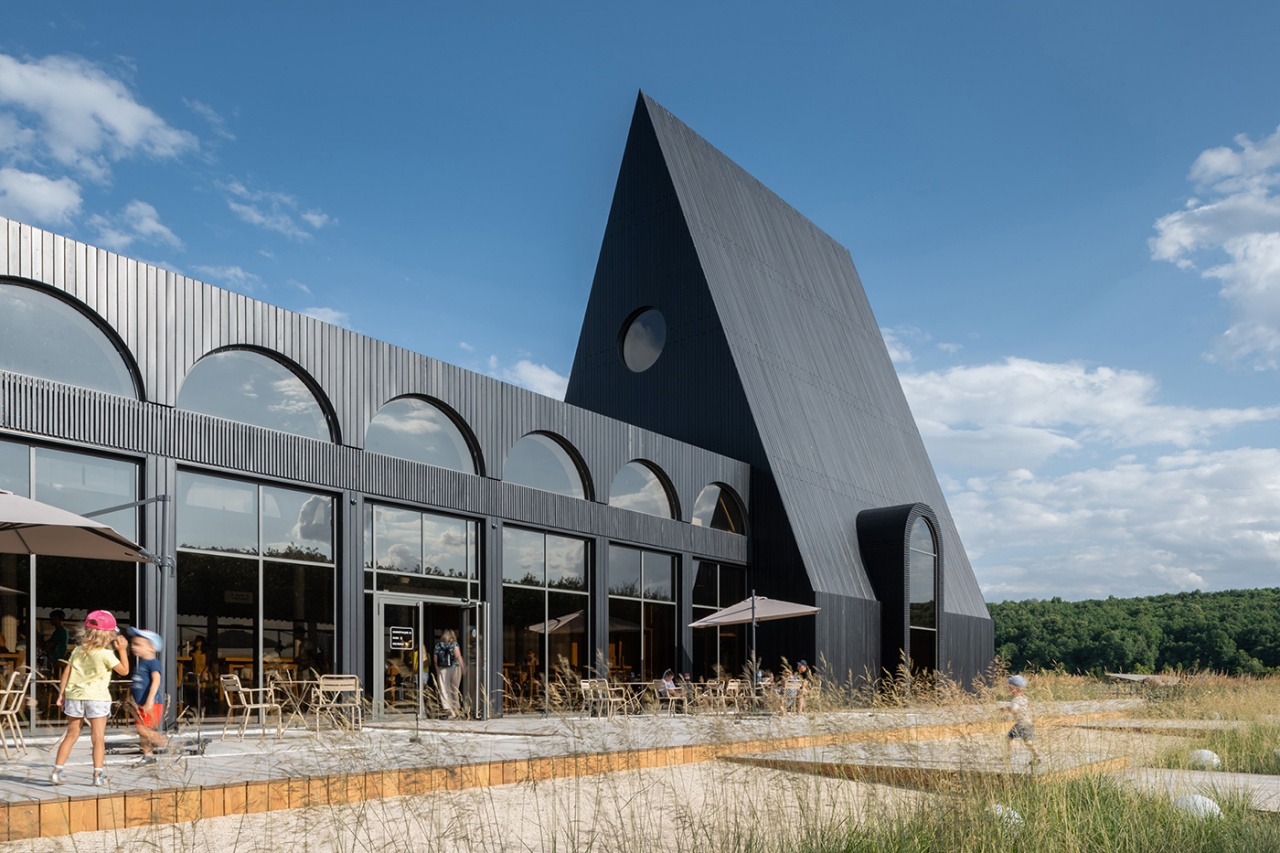 The facade is made of ebony. Black - the color of the board burned out under the sun - is the true color of Russian wooden architecture. The volume of the building, regardless of the season, works well with the landscape: on the white snow it looks as epic as possible, and in the warm season it merges with the line of tree trunks of the surrounding forest. The combination of architectural techniques dilutes the monumental forms of the buildings of the complex. Architectural ornaments of triangular windows, various lattices, belts, cracks, a variety of ways of laying boards, thinning and, of course, proportions with the character of prowess - these are some of the methods of a new interpretation of the architecture of the Russian Izba. We took into consideration the degradation of buildings, as if they were being built by a Russian peasant, eventually completing the required volumes, based on his changing preferences and tastes. 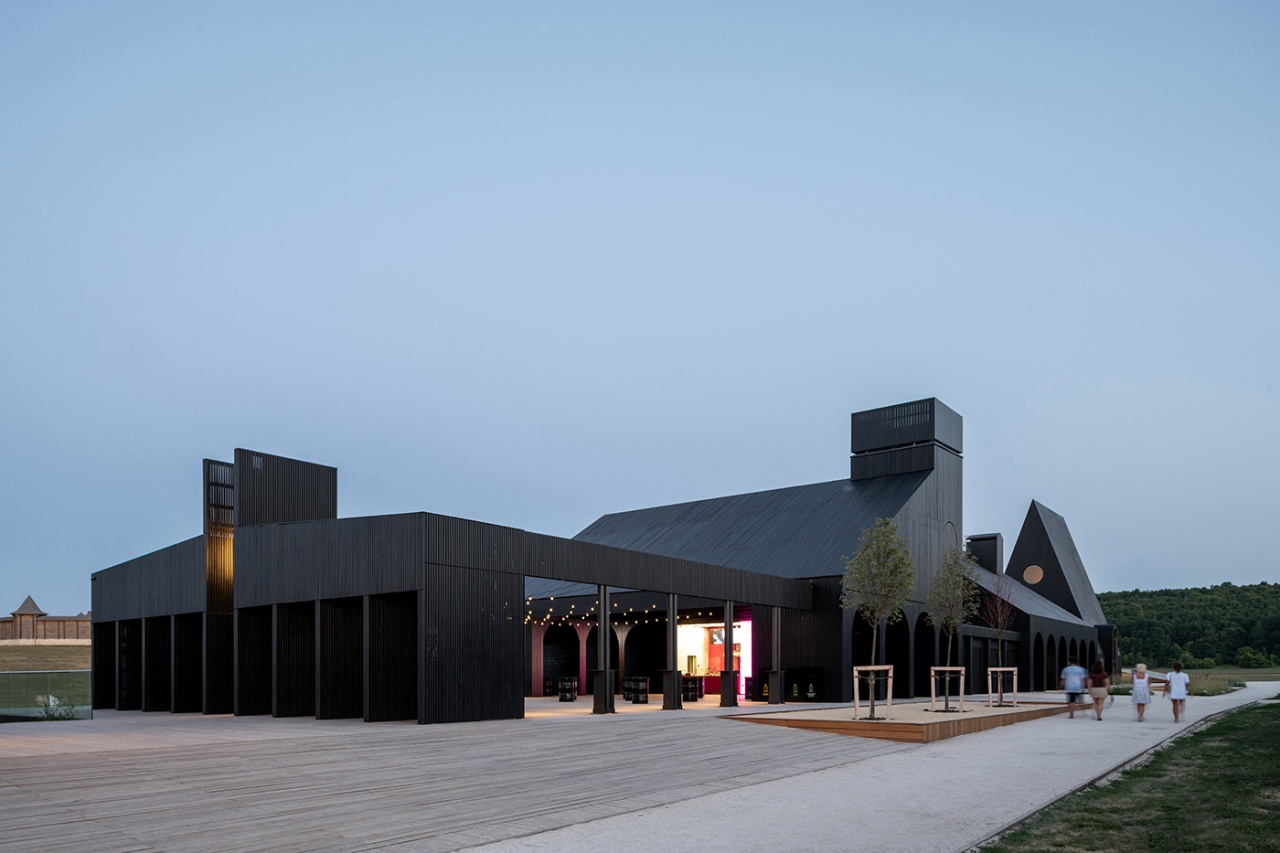 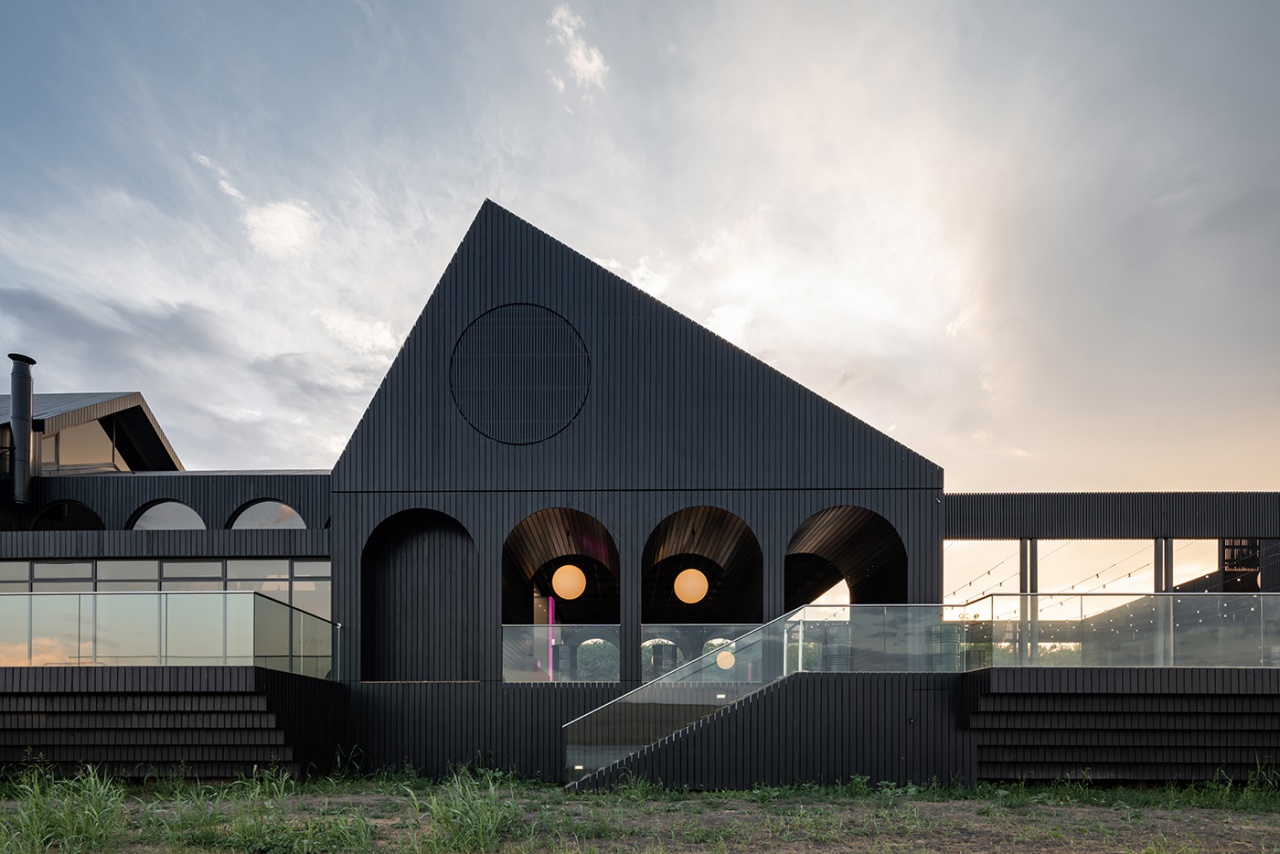 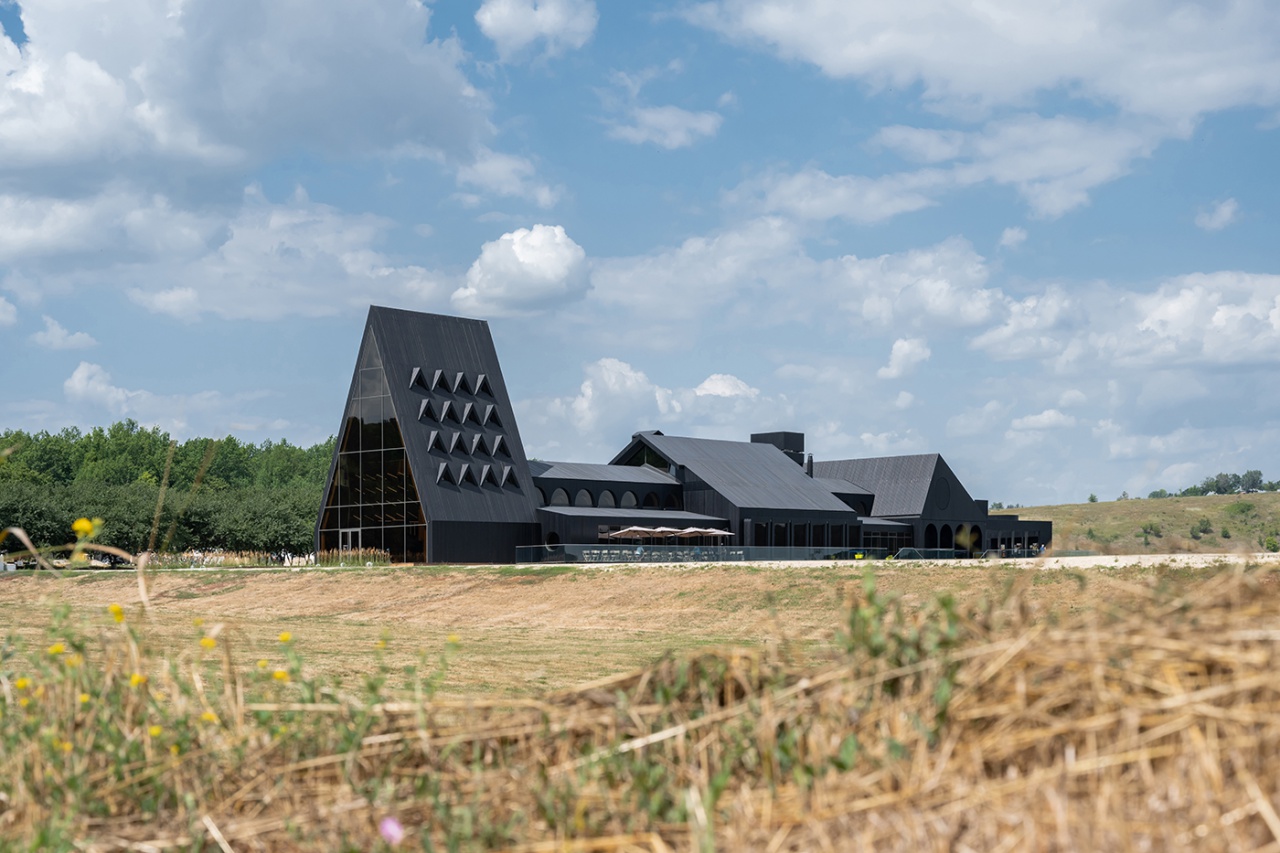 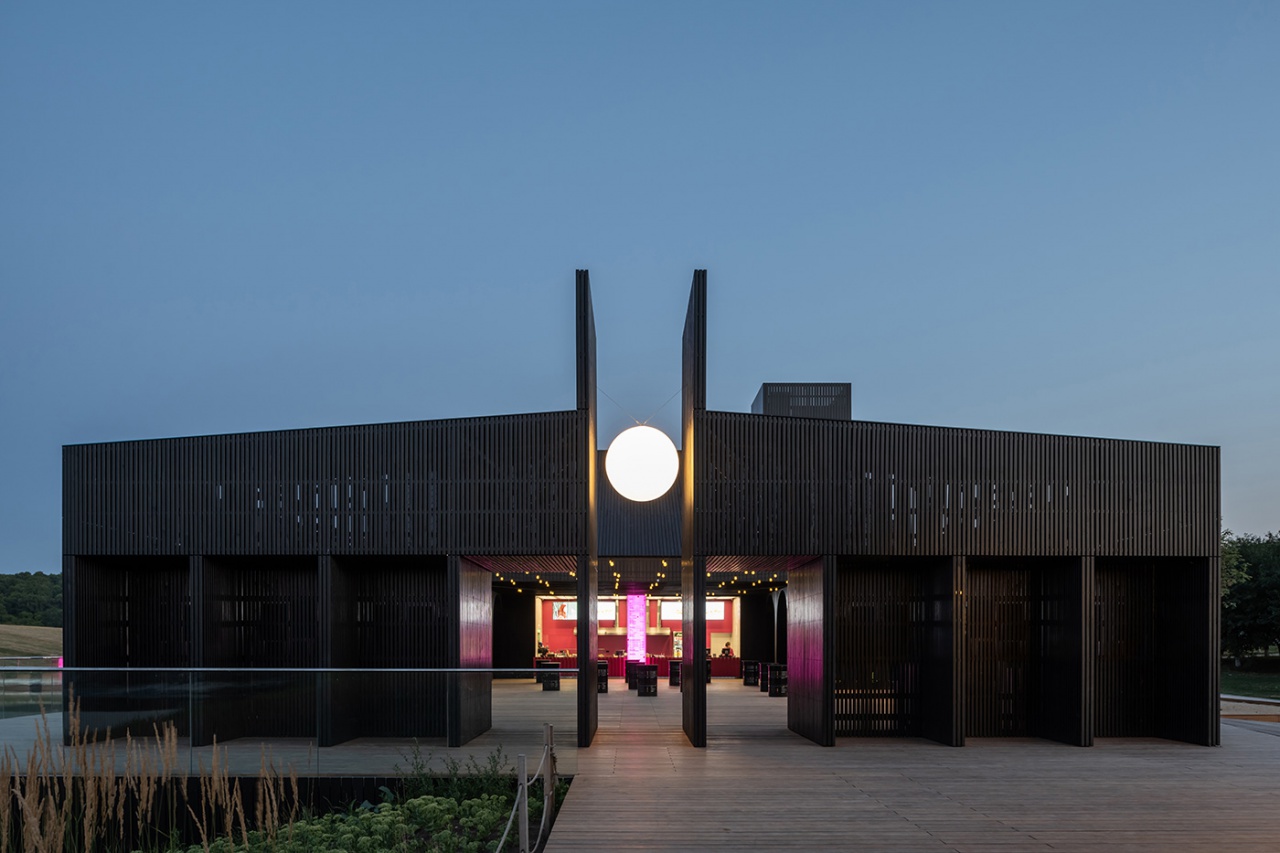 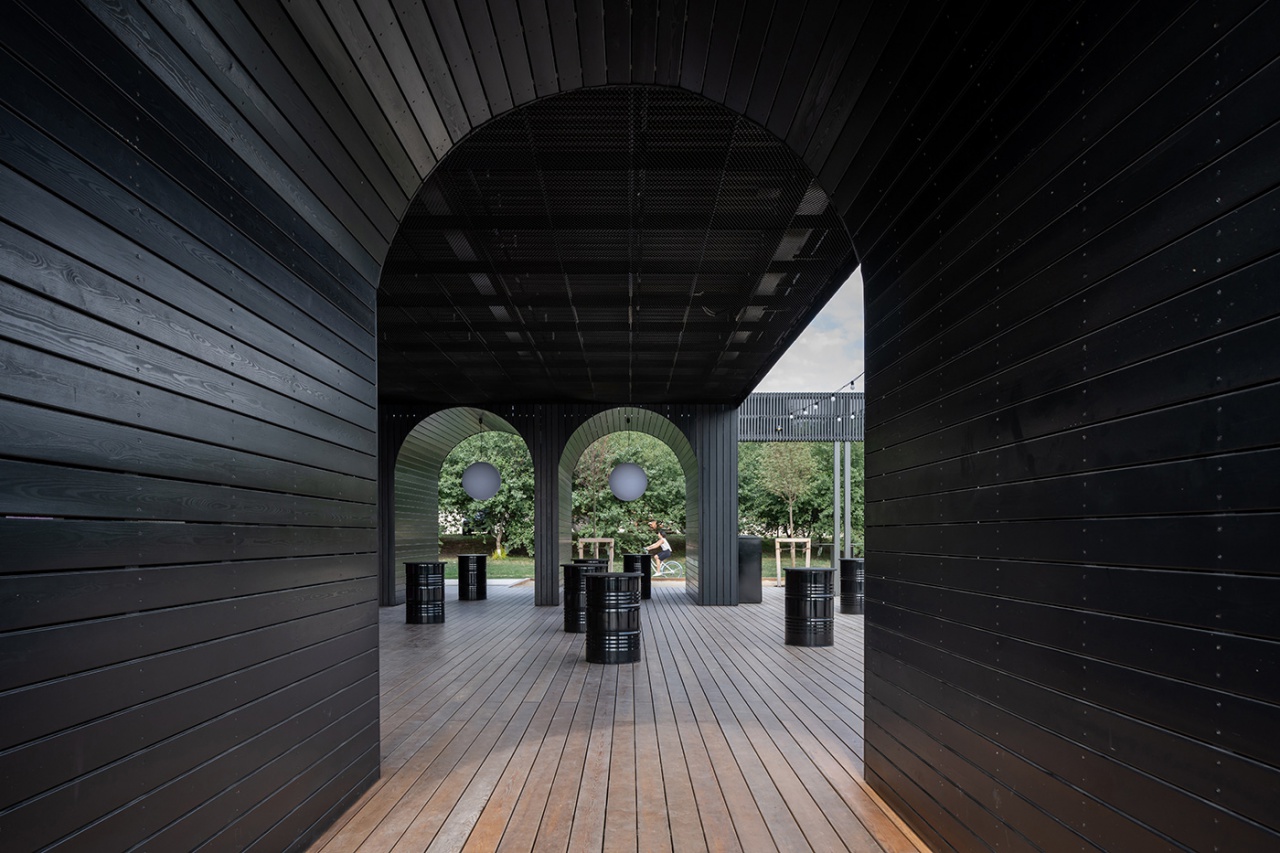 The dark minimalistic edges of the exterior contrast with the light colors and ornamentation of the interior. The complex inside is like a carved cabinet with jewels. This contrast gives visitors a new experience and anticipates the discoveries ahead. The abundance of details and textures of natural materials create a cozy atmosphere. Stylistically, the interior is also made in the new Russian style. Here you can find a large number of references to architectural techniques from various eras of Russia and the architecture of the USSR, which are rethought and compiled into a new aesthetics based on cultural codes.

One of the main techniques in the interior is the environment around. The interior has a huge number of windows aimed at the bright views of the park. Some of the seating is done in custom bay windows, isolating the company into a self-contained atmosphere with a stunning individual view. 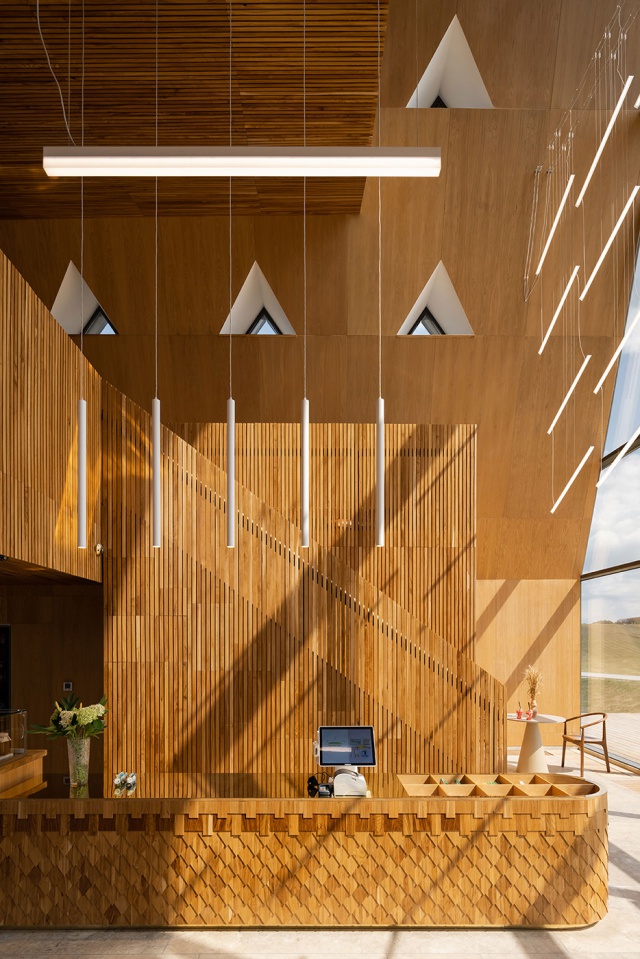 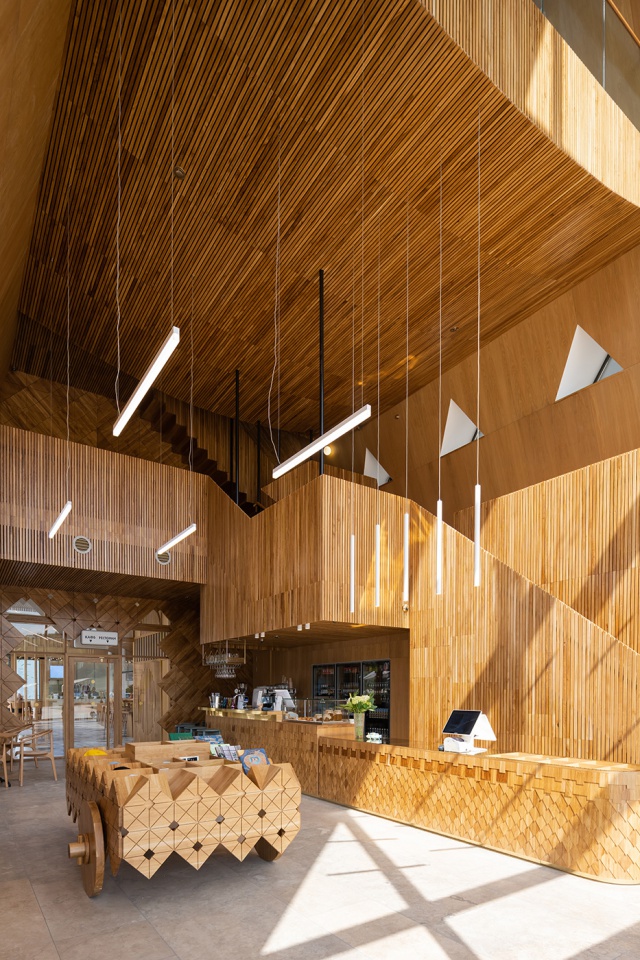 The bold character of the buildings externally, vividly manifests itself inside too. The "mountain" is the first in the chain of buildings. Inside the lobby is a dynamic volume filled with flashes, arrows, beams of lamps with a huge souvenir cart. From the first steps, wood finishes and tactile surfaces create an atmosphere of hospitality. The hosts meet visitors in the lobby, help them navigate the park, and treat them at the buffet.

Cafe is the next volume. It is a huge building with one nave, a huge hut. Inside it is light, like a peasant room (analogue of a living room). This space can accommodate the maximum number of guests. The concept of going to the toilet without a possible feeling of moral discomfort was implemented here too. In Russia, toilets are not the most pleasant place, often not so clean. In the complex, going to the toilet is part of the joyful experience. 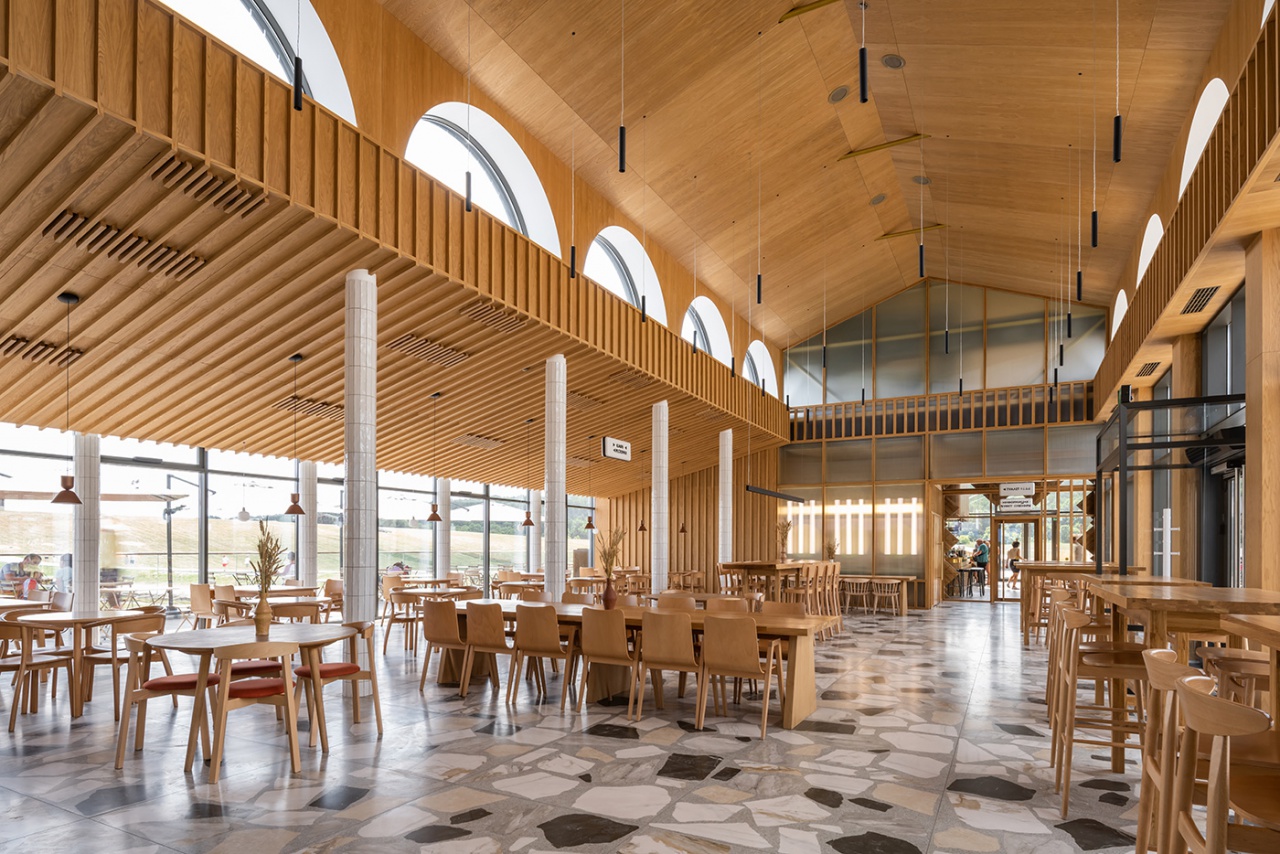 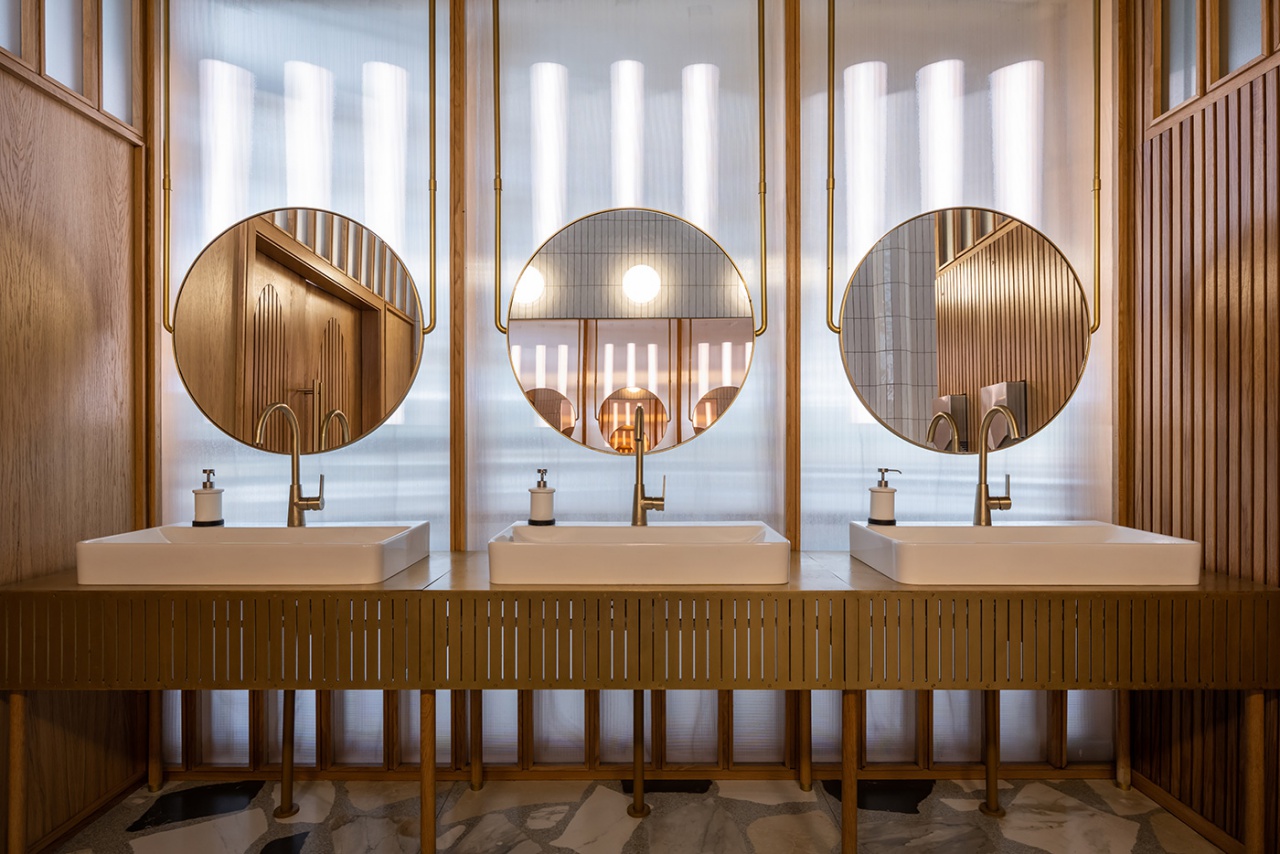 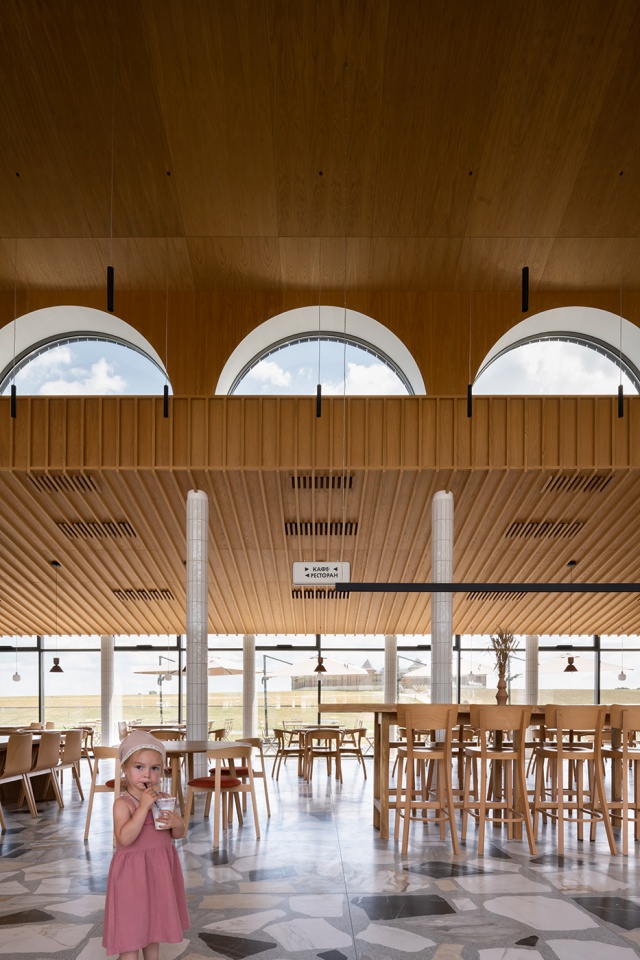 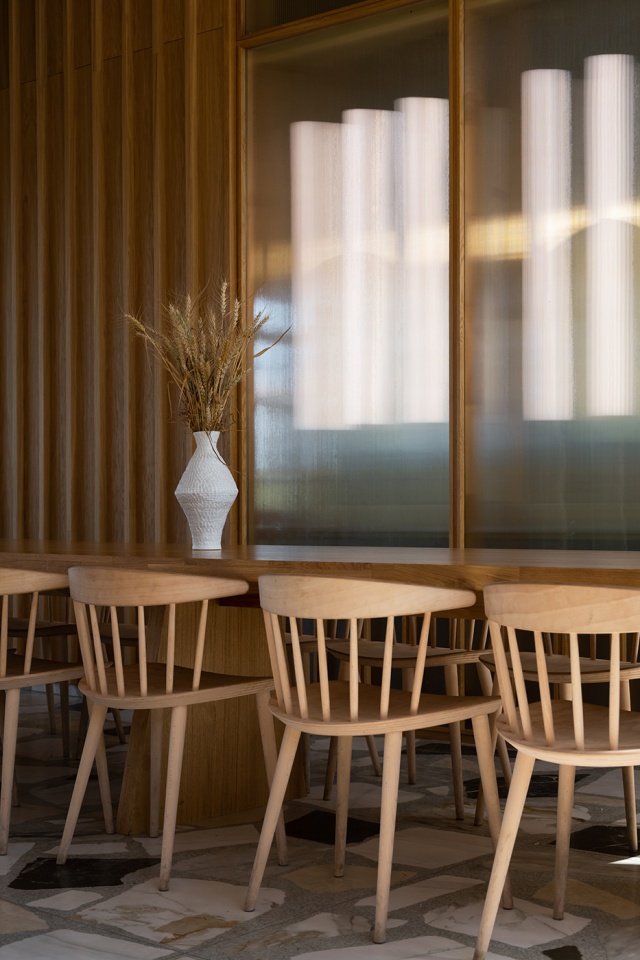 A kitchen building with arched legs is like a flour store. The concept of an open kitchen has been played up in a new way. Technical premises are positioned as art objects. They are glazed, illuminated and viewed from the street like showcases. Each showcase has its own protagonist: the chefs and their assistants.

The restaurant is the same hut as the building of the Cafe, but more intimate. Deaf surfaces here are discreetly decorated with patterns. Hanging lamps in the common nave add fabulousness. In the restaurant, there is a reference to Russian mansions - a heavy brick bottom, a pavement floor, openwork air windows, belts of rich patterns along the walls, gold and brass for sunny flowers.

A long corridor leads to the restaurant hall along the view niches of the cafe. Symbolic lace on the ceiling has been added to the minimalistic surface of the embossed mirror. 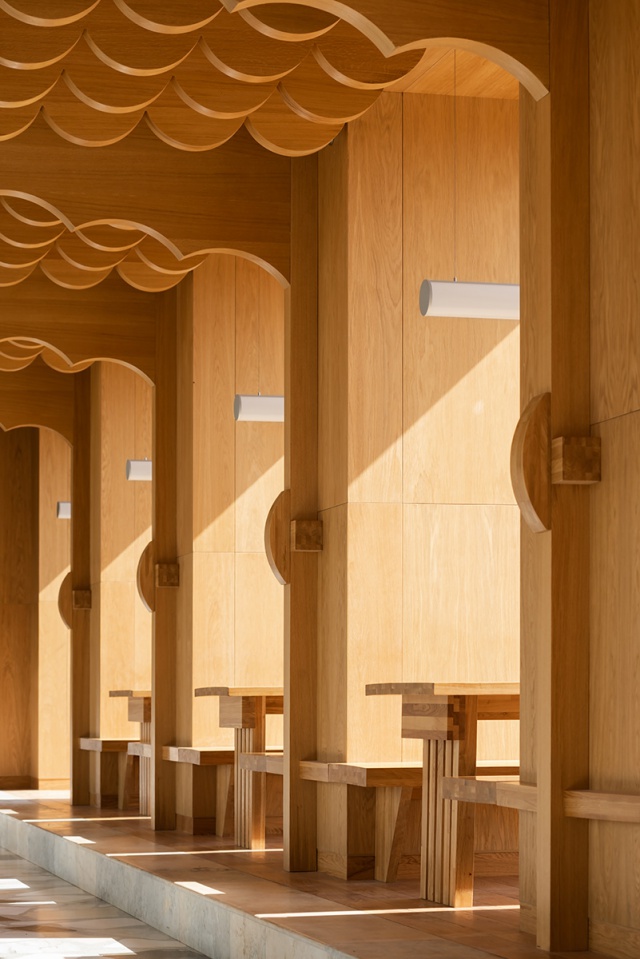 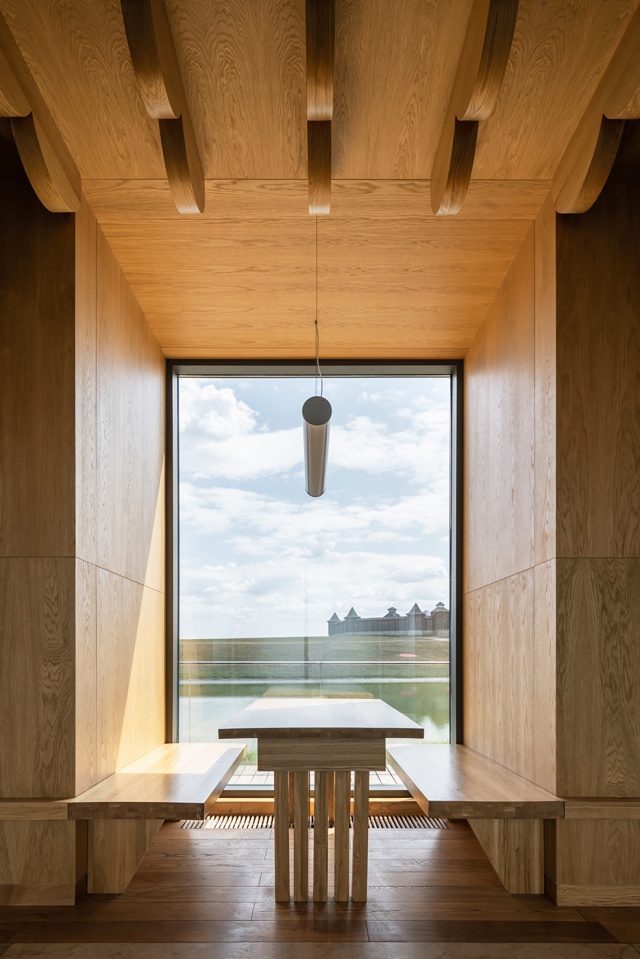 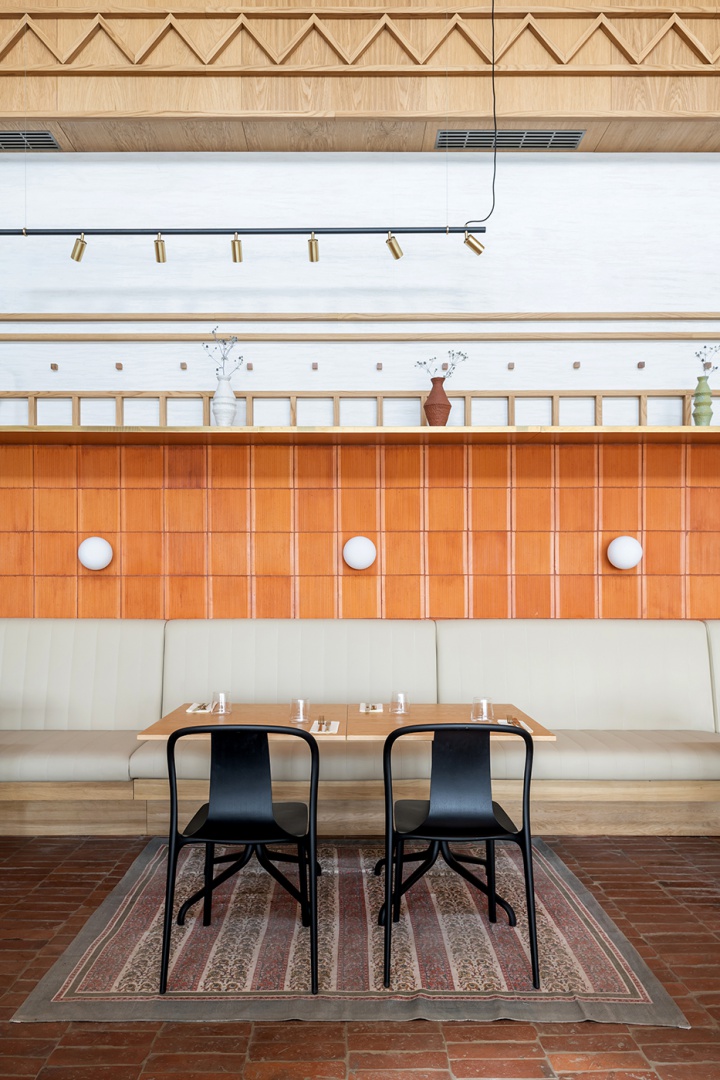 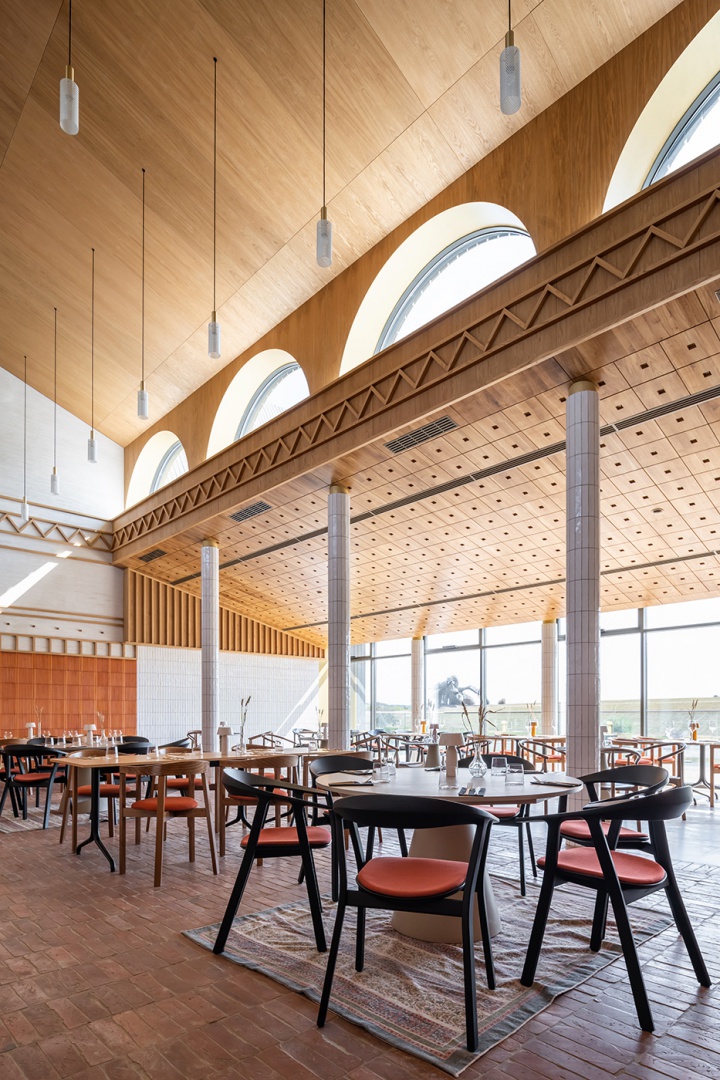 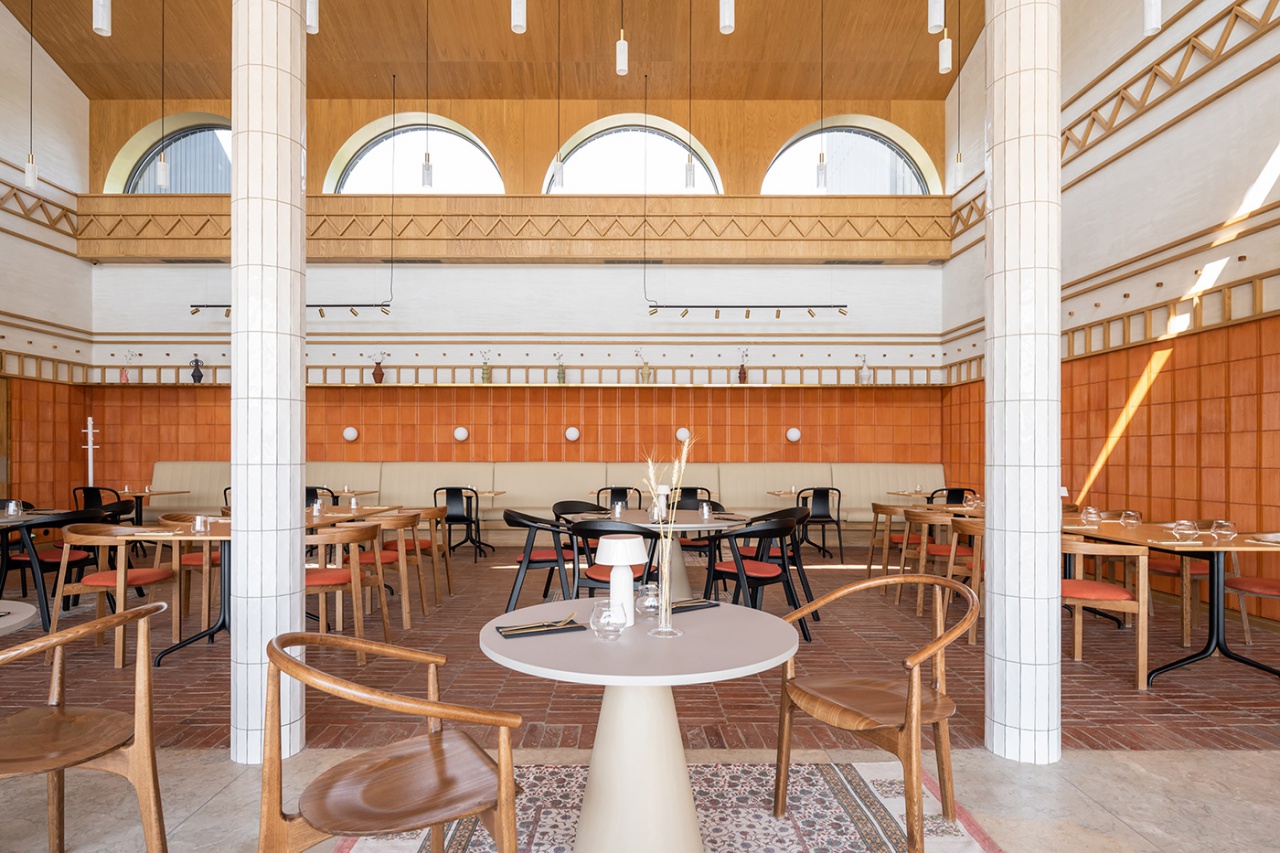 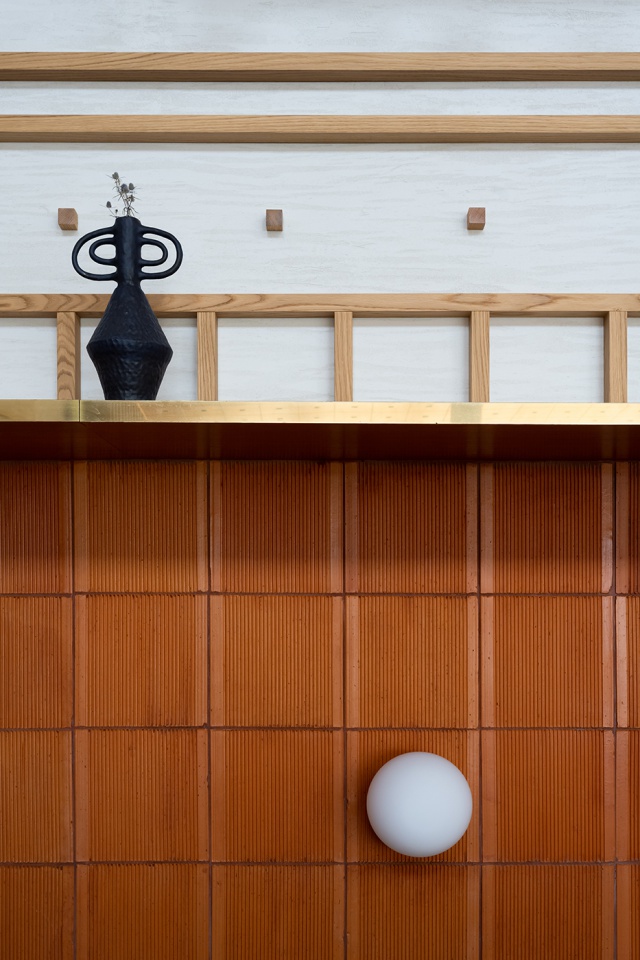 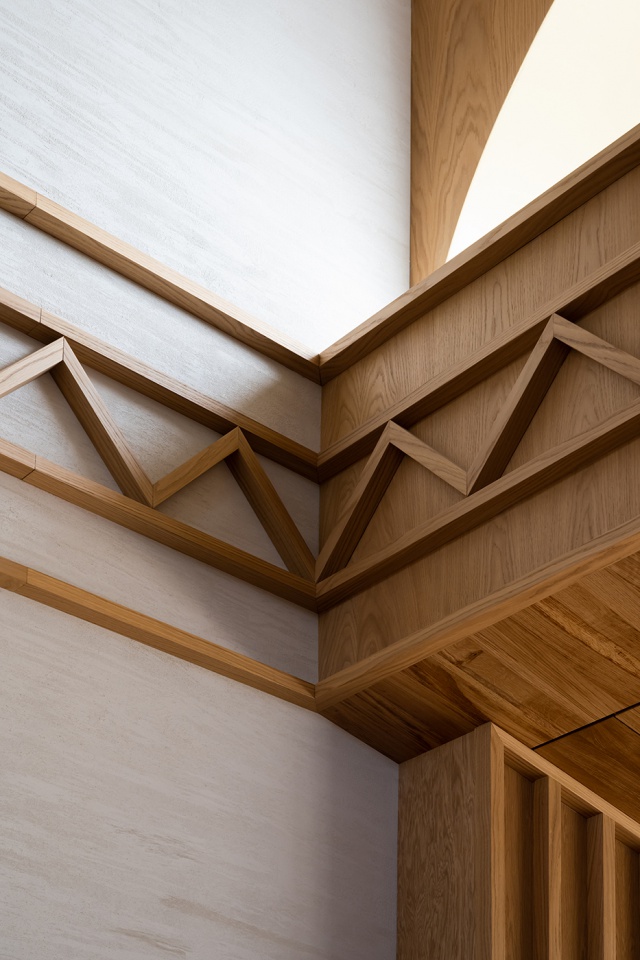 Street food building - bright, trendy and unexpected! A platform for socializing, street food, events and fairs. In the evening, its stars and its own moon, a huge ball lamp, arise here. Fuchsia lighting has been added to the overall picture of the open kitchen. 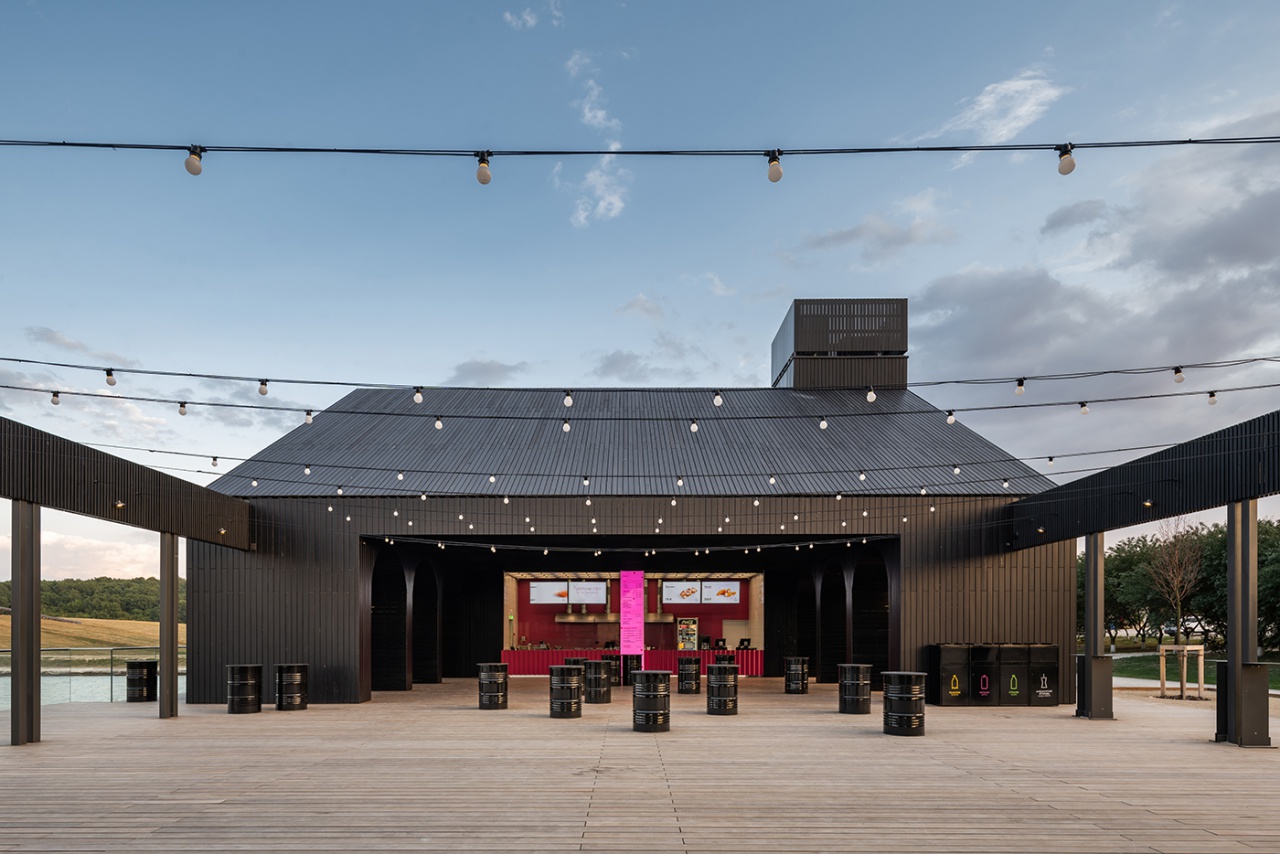 The round toilet completes the complex in its present state. The shape of the button or knuckle is flexible enough to accommodate almost any new volume after. In the near future, one of the concepts for the continuation of development will be chosen.

Due to the many separate entrances from the street, each block can work autonomously and be separated from the neighboring ones, for example, during events great variability of usage scenarios is achieved. 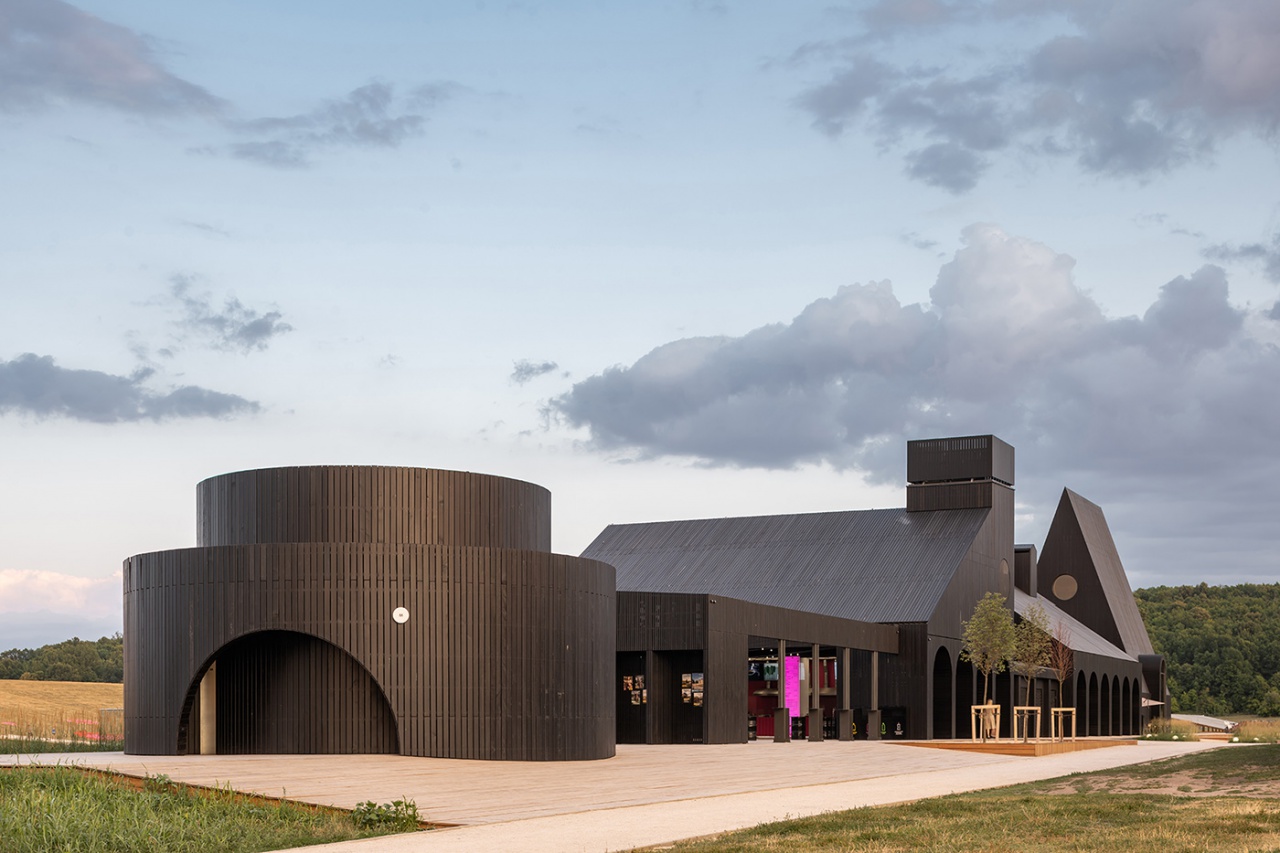 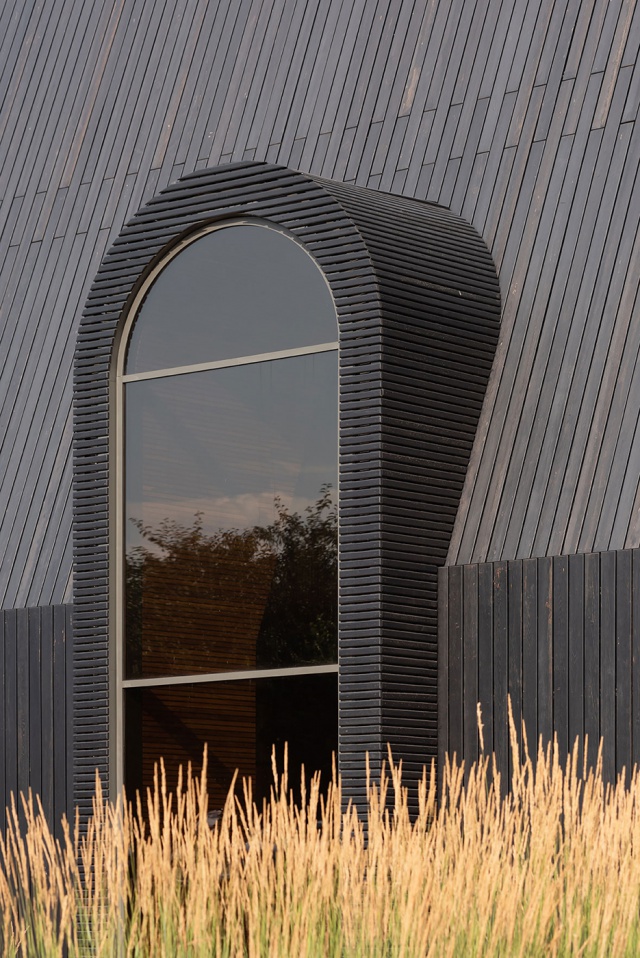 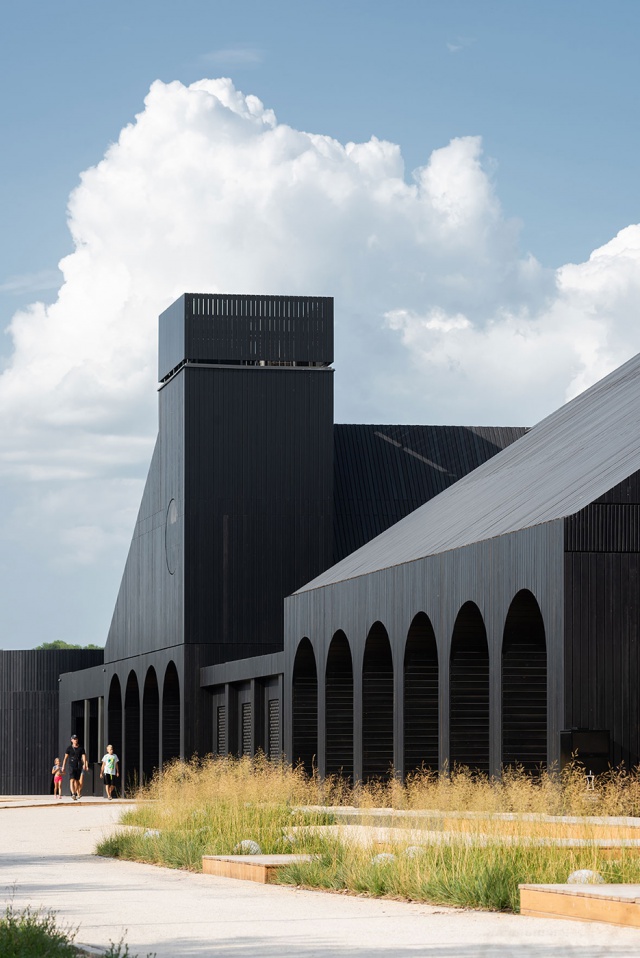 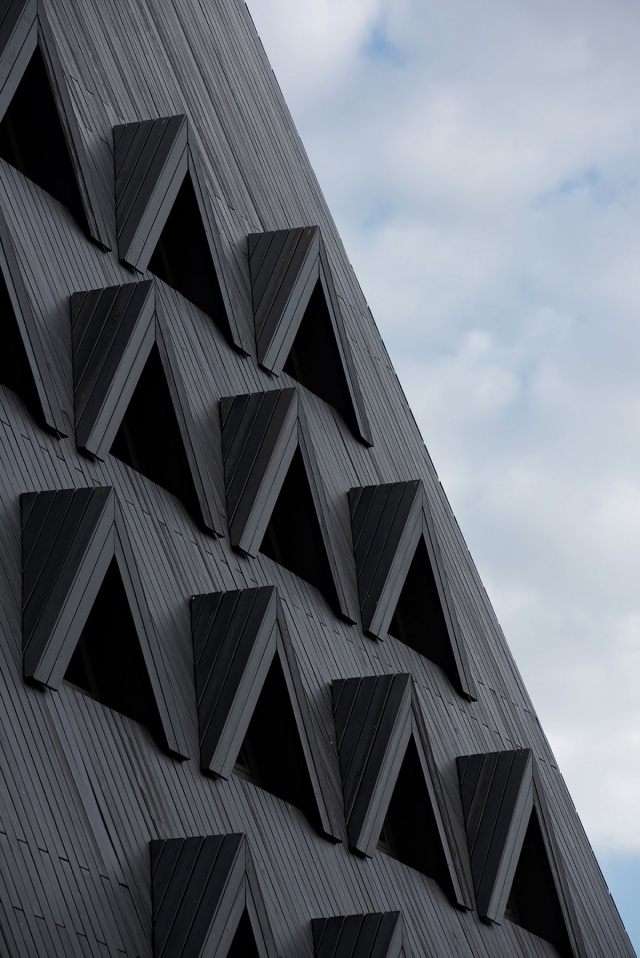 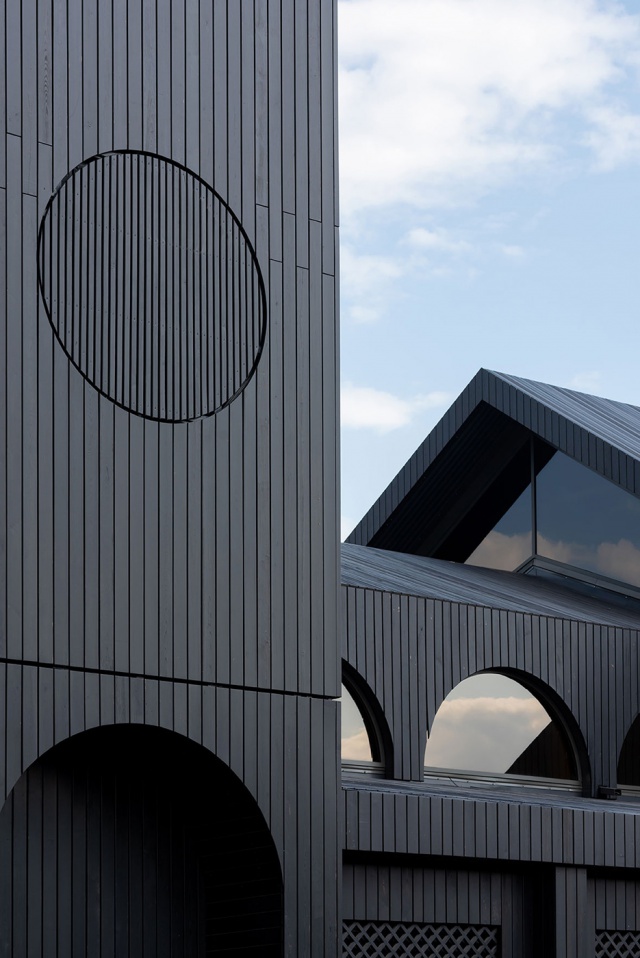 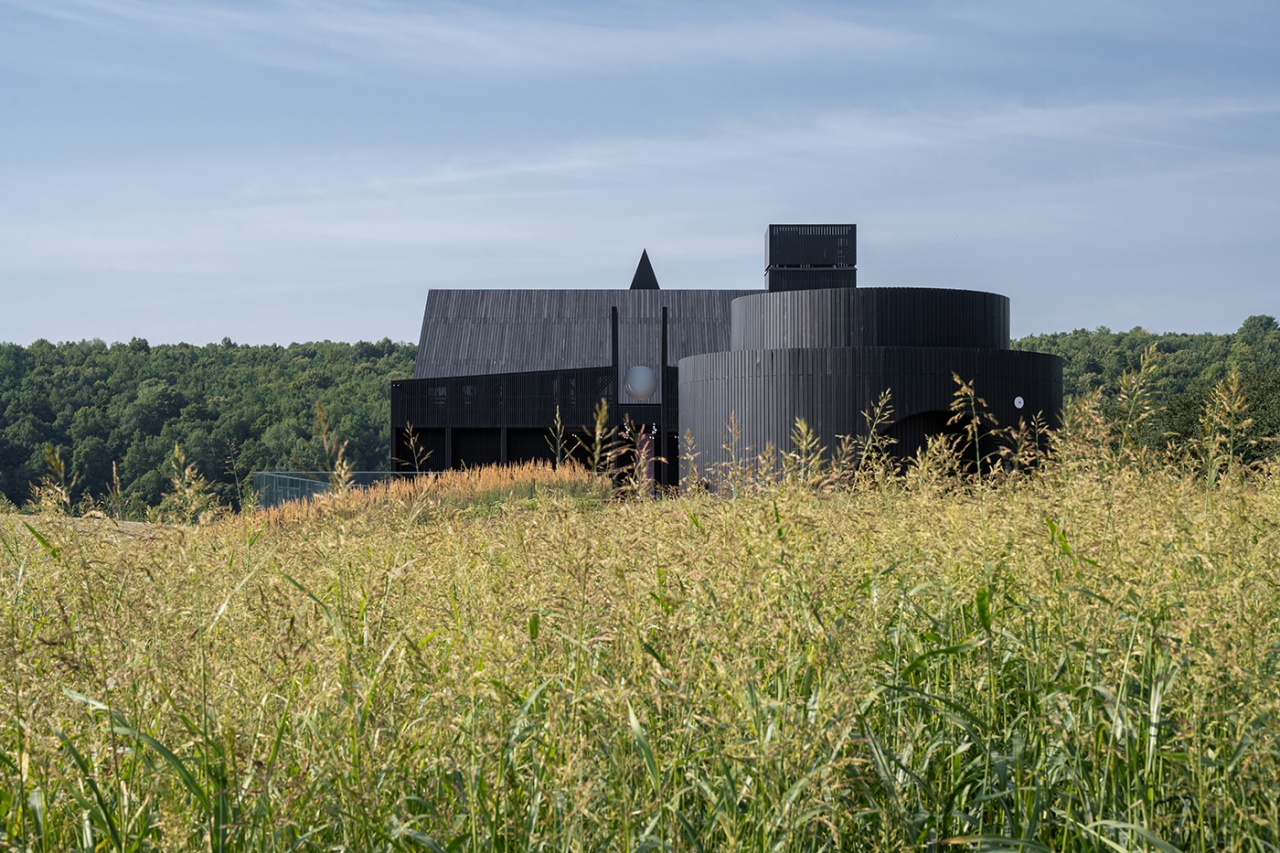 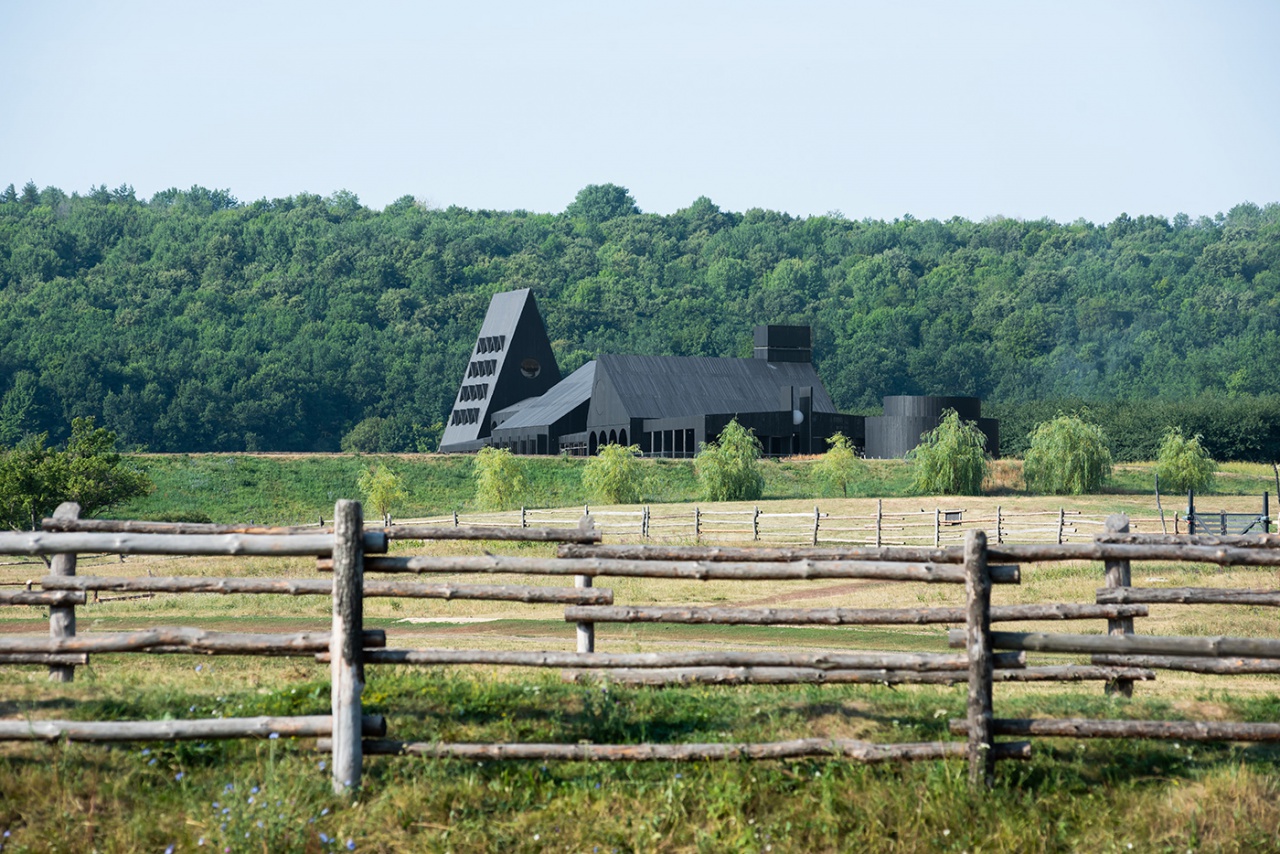