Non-intermittent uniform promenade. It will ensure the unity of space perception, comfortable and safe travel between the bridges, Moscow railway station and the Spit.

Friendly pedestrian lighting. It creates more comfortable and safe environment. If replacing the existent lamp posts is not possible, we suggest to hang light fixtures or to put up separate short lamps.

Abundance and multi-functionality. The promenade’s mixed functionality (recreational areas, playgrounds and various facilities) ensure active and flexible use of the urban environment.

All-season canopies. They protect from the sun and the elements. They can be fitted with infrared lamps to keep people warm during the cold seasons, Wi-Fi, ports to charge electronic devices.

Four parts of the promenade. The promenade is long and has parts of different character. It depends on how far it is from the road, the adjoining objects, if there is greenery, what landscape there is, etc. We can mark four distinctive sections, for which we chose four principles of shaping the environment.

Neat vegetation. Protective and decorative vegetation should ensure space safety and beauty. The trees should have tall trunk and the bottom of the crown starting at least 2.5 m above ground, bushes can be up to 1.2 m high.

Accessibility. Highly accessible urban territories, inclusive of all groups of citizens (including people with reduced mobility, visually impaired, hearing impaired people and people with other disabilities) with pedestrian priority.

Sport. According to the data provided by strava.com, the side of the promenade adjacent to the river is a popular spot for jogging and cycling. Sport infrastructure will support and expand these initiatives.

Positioning towards not anti-social users. It should include functions that attract different user categories; see-through area; possibility of social control.

Art and installations. It will create the promenade’s identity, give work to local artists.

Cycling infrastructure. Connect the site to the network of cycle lanes planning to be implemented or already existing in the city, ensure proper infrastructure for the comfort of use.

Exposure to water and the other riverbank. Viewpoints, tower viewers, see-through fencing, spots to gaze and have a picnic will ensure visual connection with the historical part of the city. A part of activities will be located on the functional concrete floats on water. воде.

Design code for wharf boats. Wharf boats have now large potential to be included in the life of the promenade. We should create a common design code for them and check if we can connect them to the city’s sewage system.

Creating a comprehensive second level. It will make a backup route for walks in better comfort and with a wonderful view of the river and the Grebnevskiye Peski island.

Based on the visual landscape analysis of the territories and the social and cultural research, we suggested the solutions that would solve the territory’s main problems, i.e. its negligence, lack of functional areas and being a nuisance for all the groups of people.

The promenade received a site to hold events, pavilions for a variety of uses, including a public toilet, that was missing there throughout the entire territory. We also managed to arrange spots for quiet and family recreation, a children’s area and even areas for picnics on pontoons. Besides, to let the residents enjoy the view of the river and the historic centre of the city, a large circular tiered seating was built next to the Ermolayevy Hotel, and viewpoints with tower viewers appeared along the promenade. As many people come to the promenade to do sport, we provided the areas for different groups of people: a workout area, a skate spot and parking for bicycles.

Bookcrossing performs the cultural and educational purpose. Open-air dancing found its place, too. To ease navigation, we installed information stands and provided a beautiful map. We didn’t forget about local designers either, there are plenty of them in the city – we are going to build a glass block pavilion for them, which will attract not only the locals, but tourists as well. 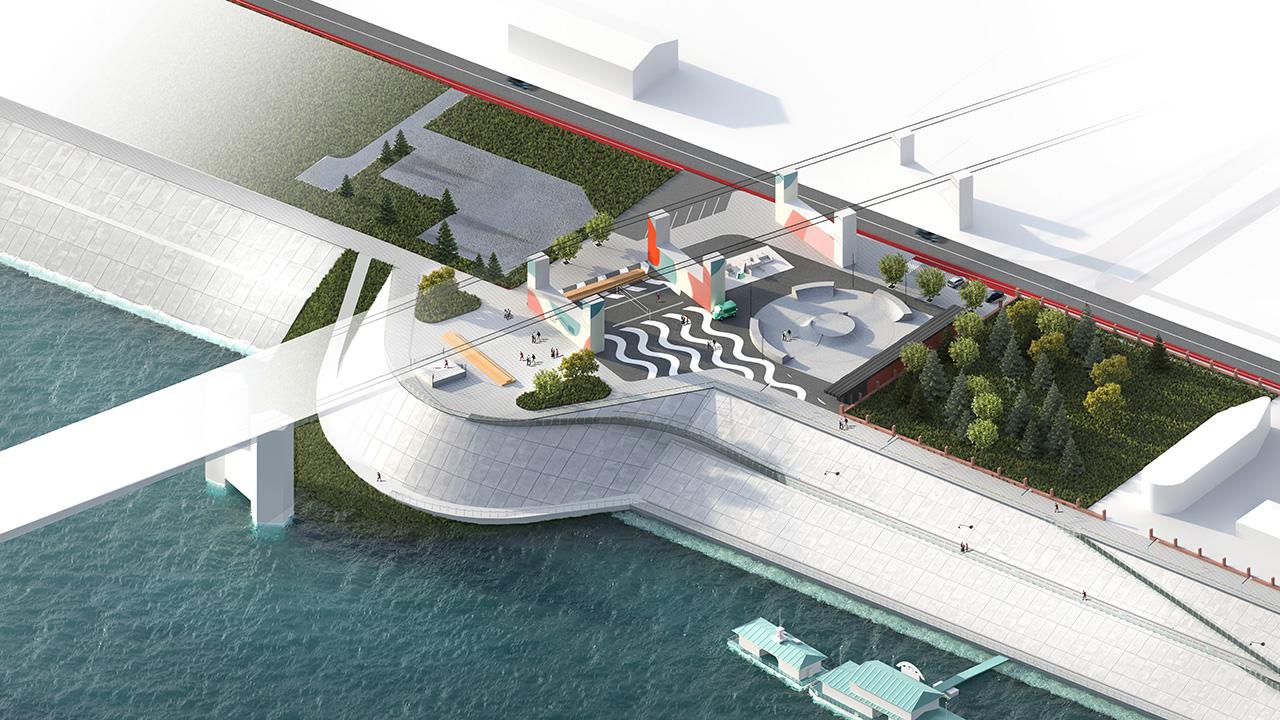 Section next to the Metrobridge. It will be completed as part of the second stage development. 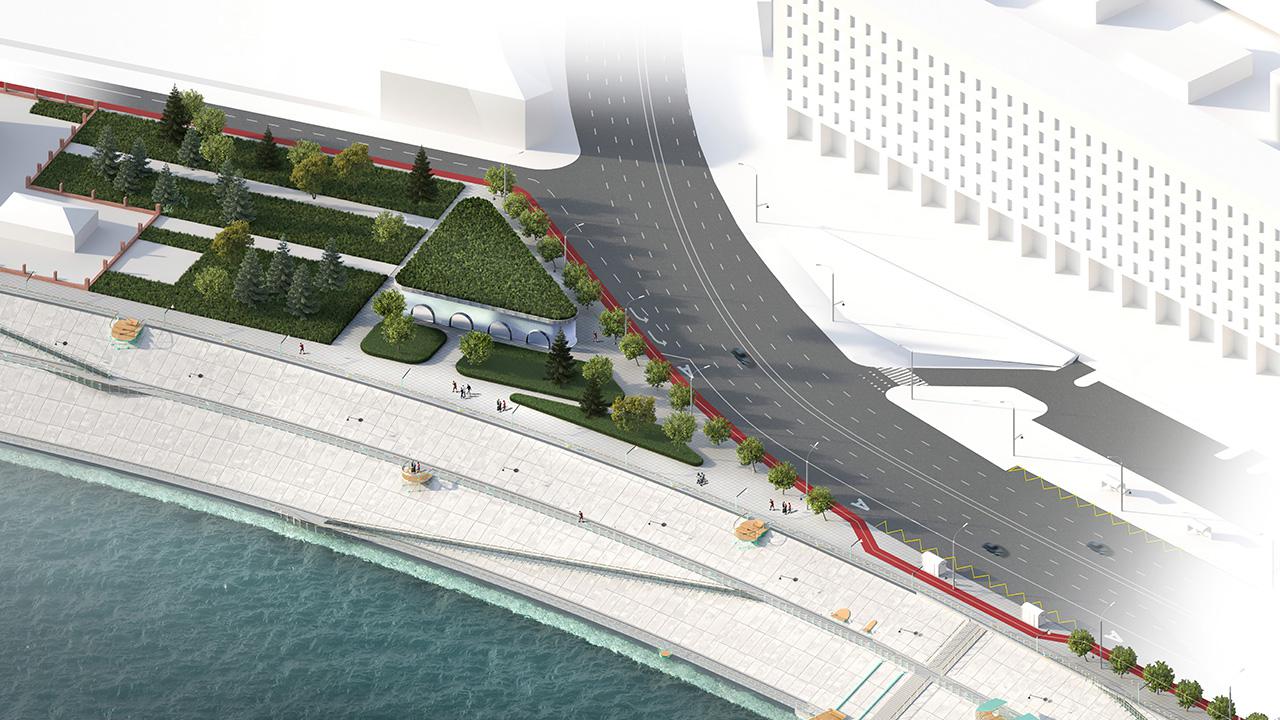 Section at the turn of Sovetskaya street. It will be completed as part of the second stage development. 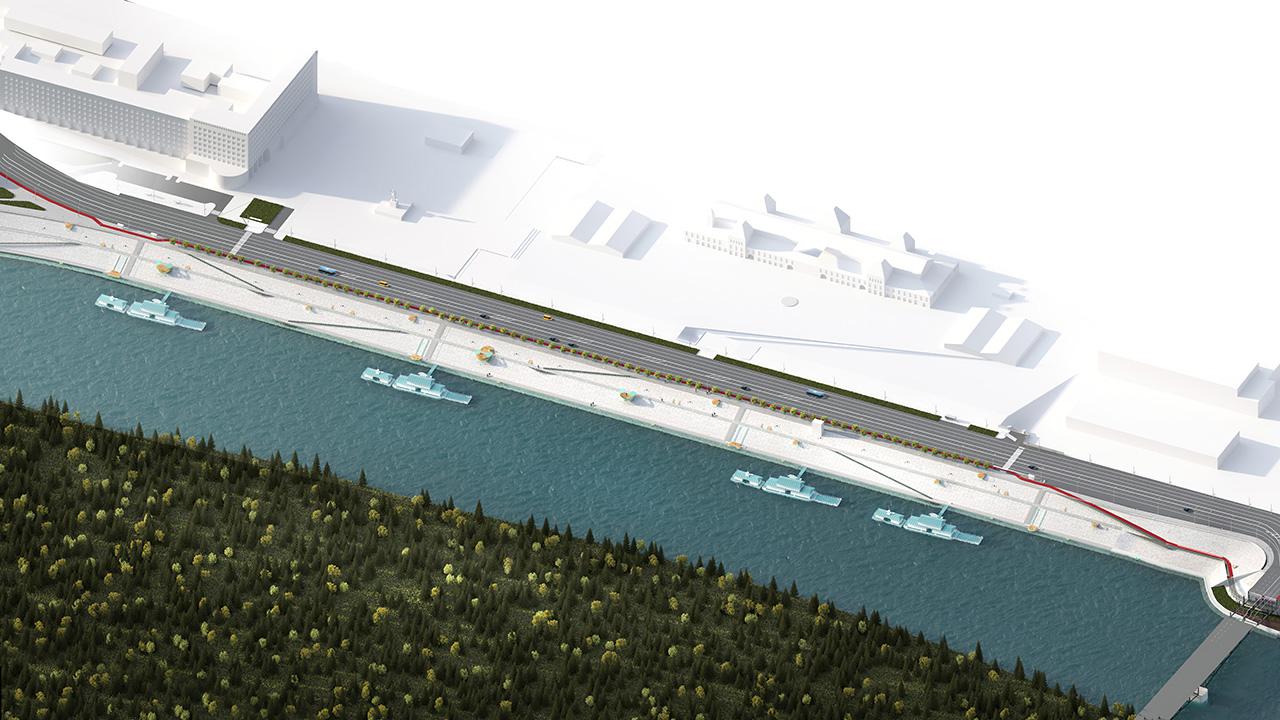 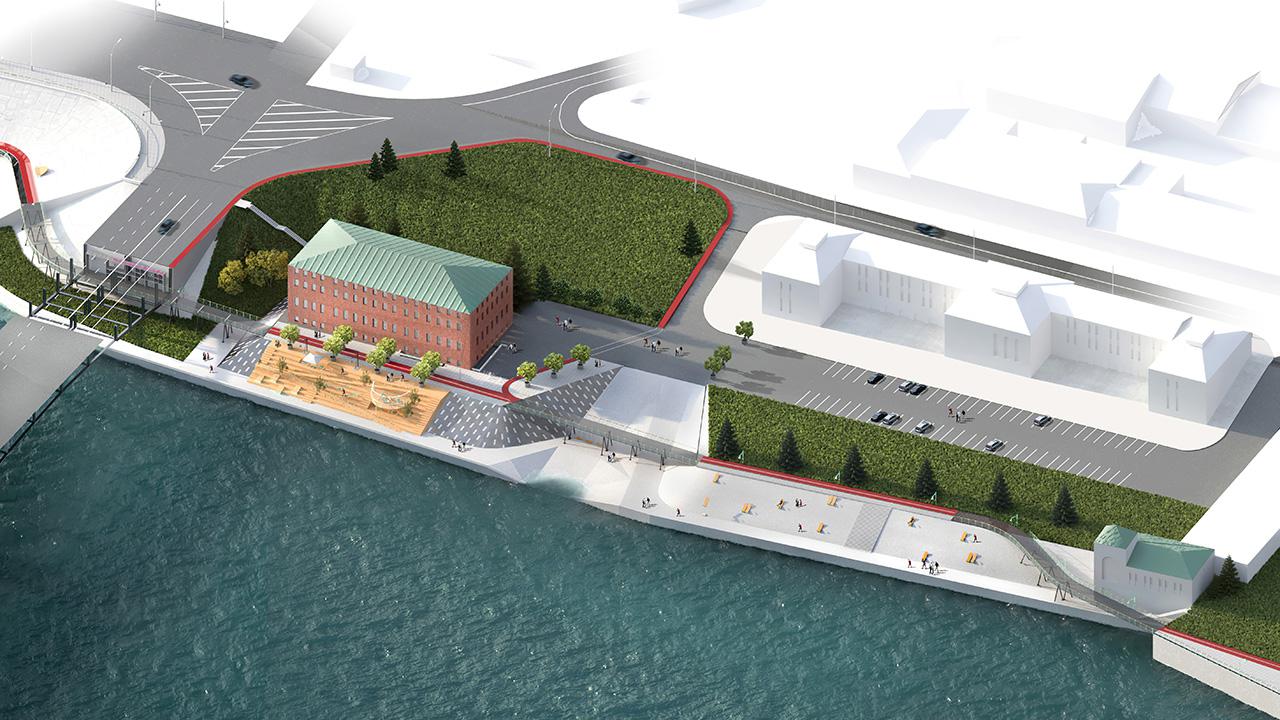 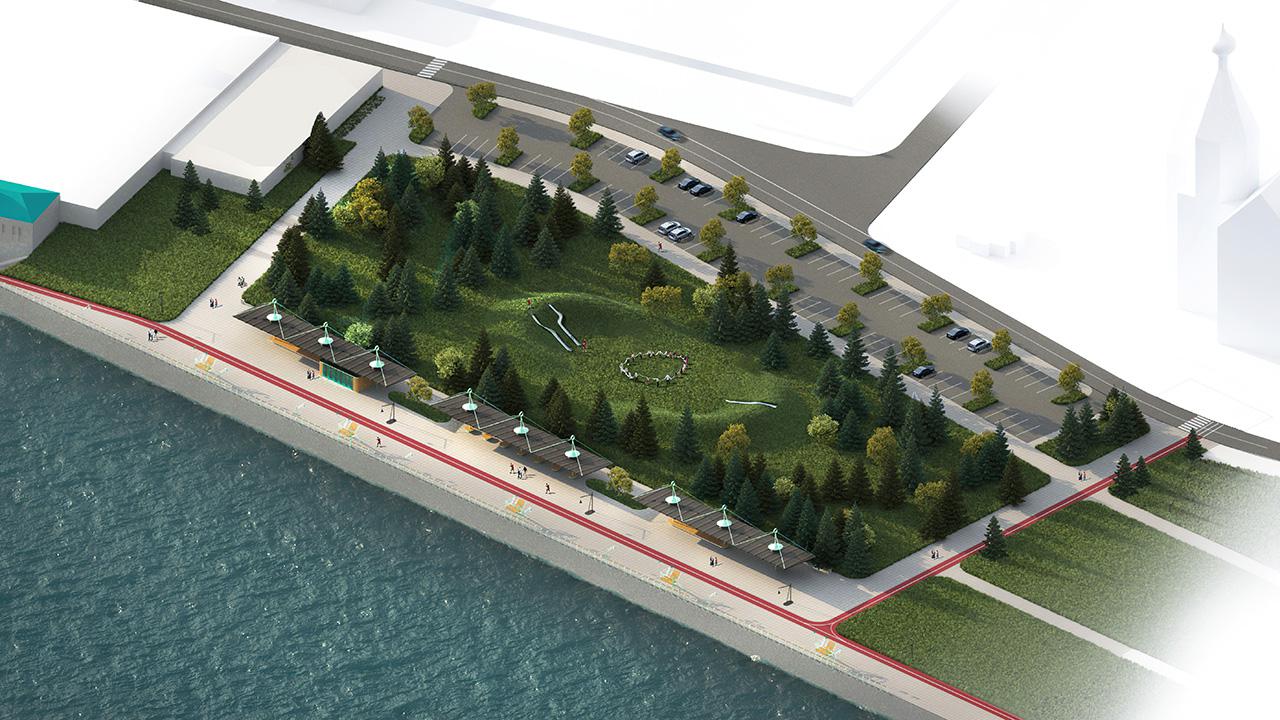 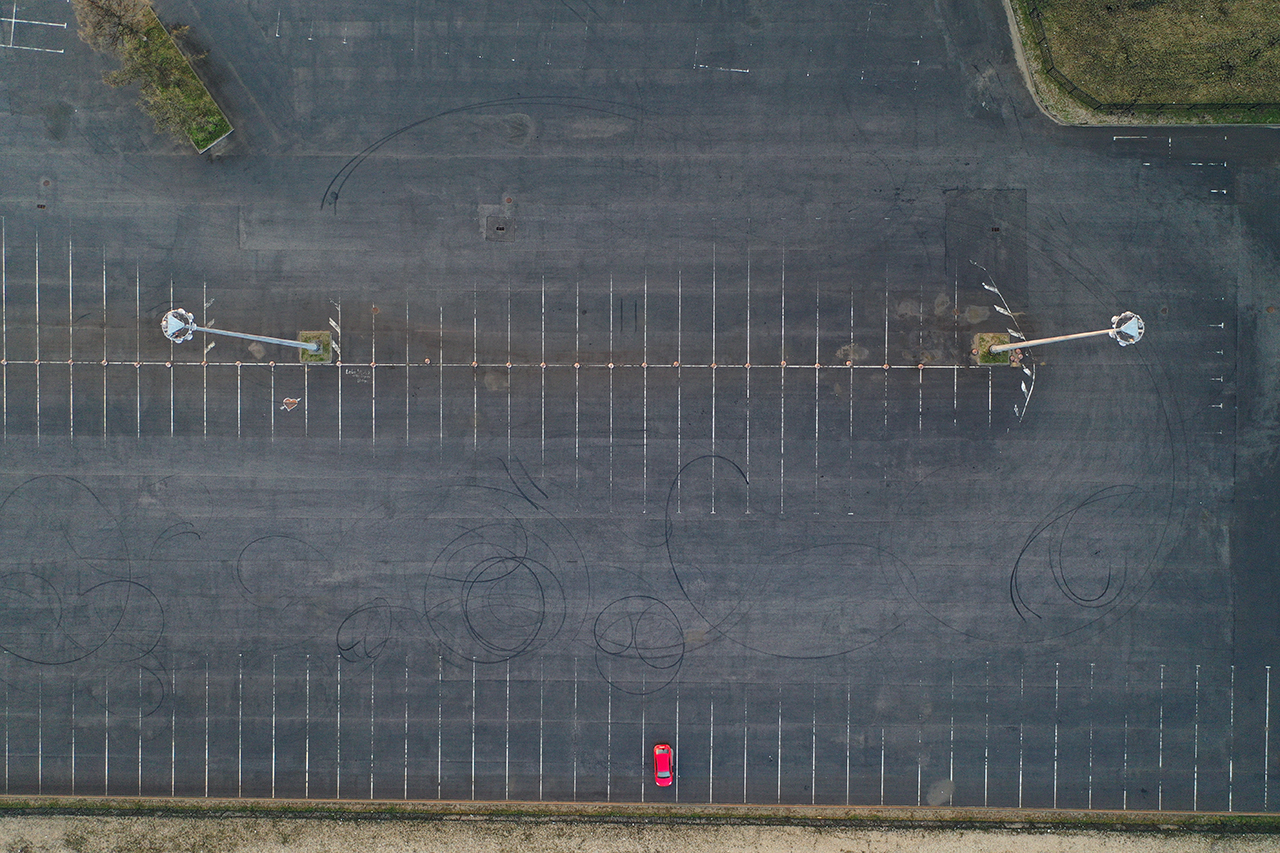 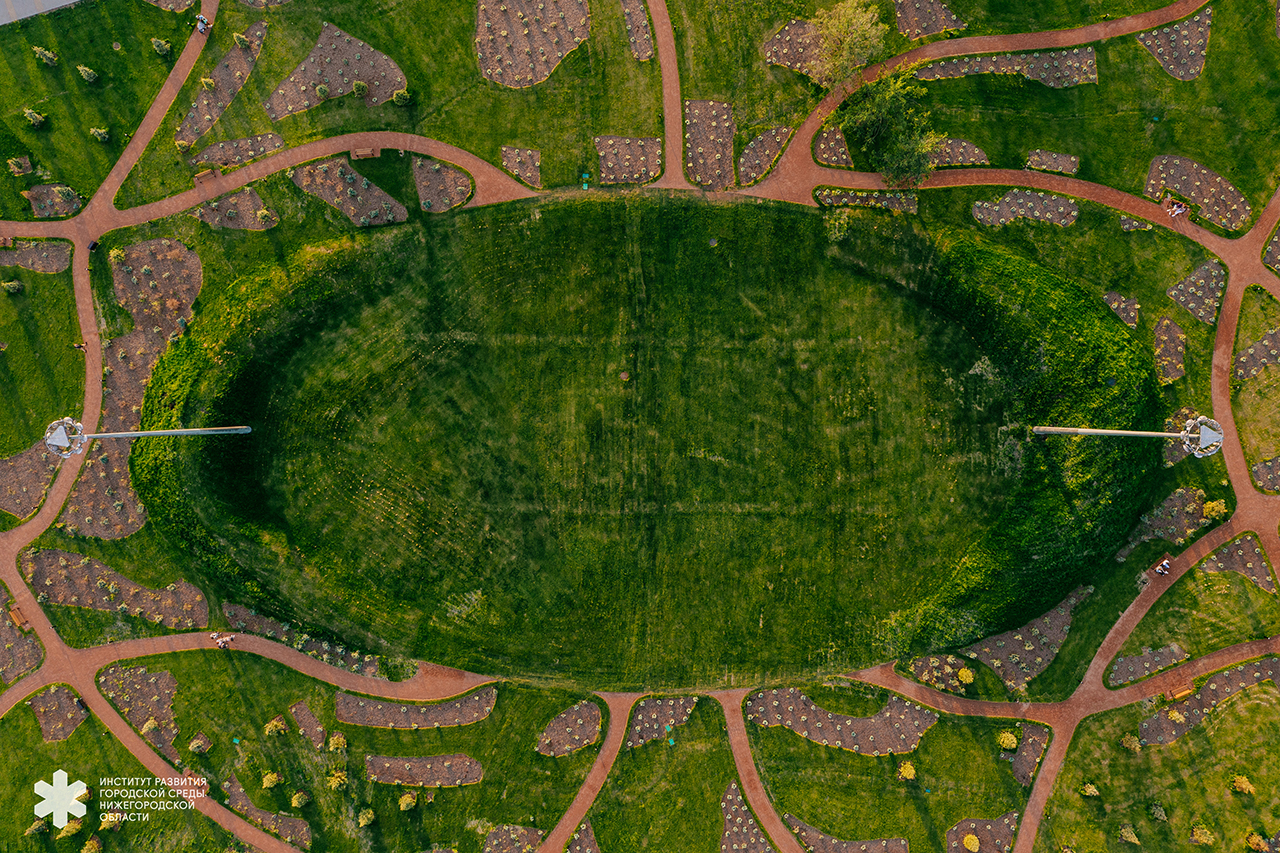 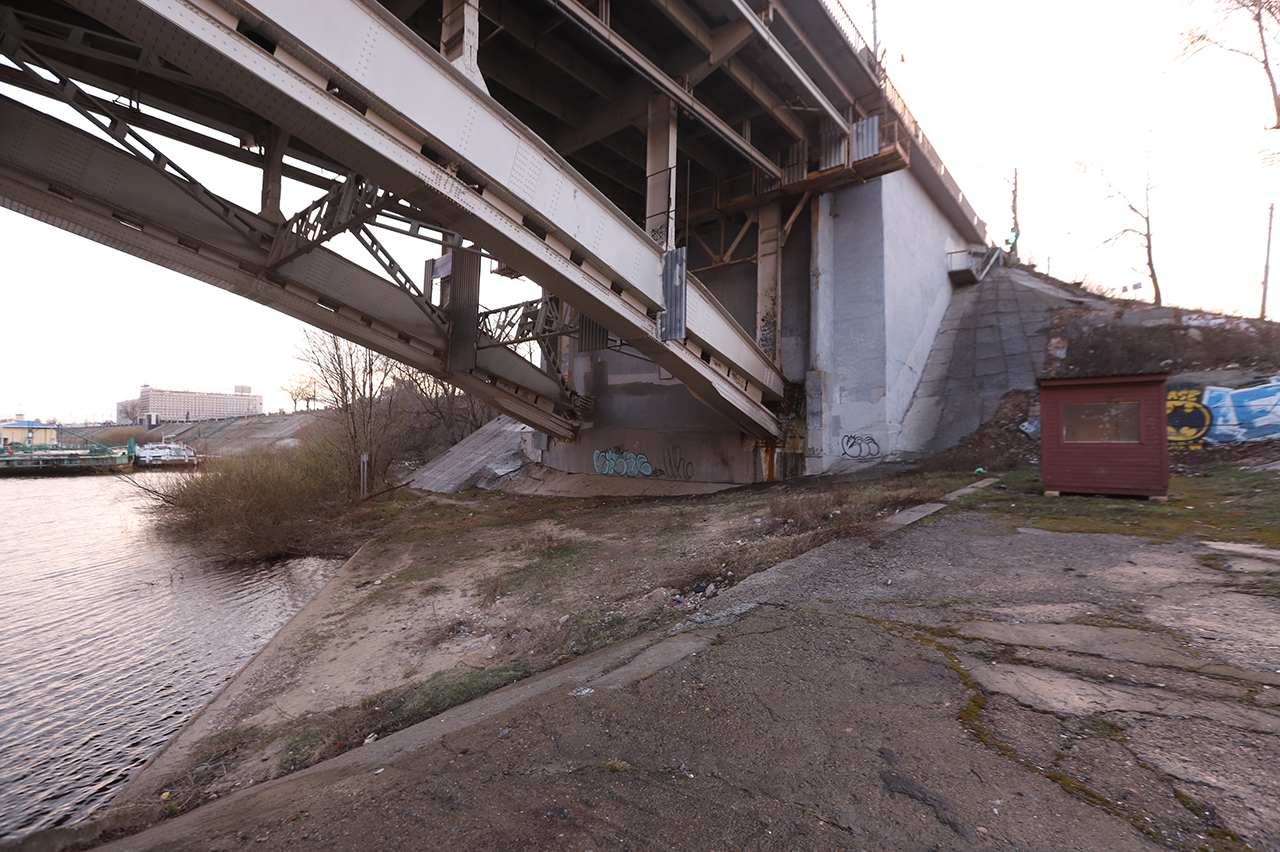 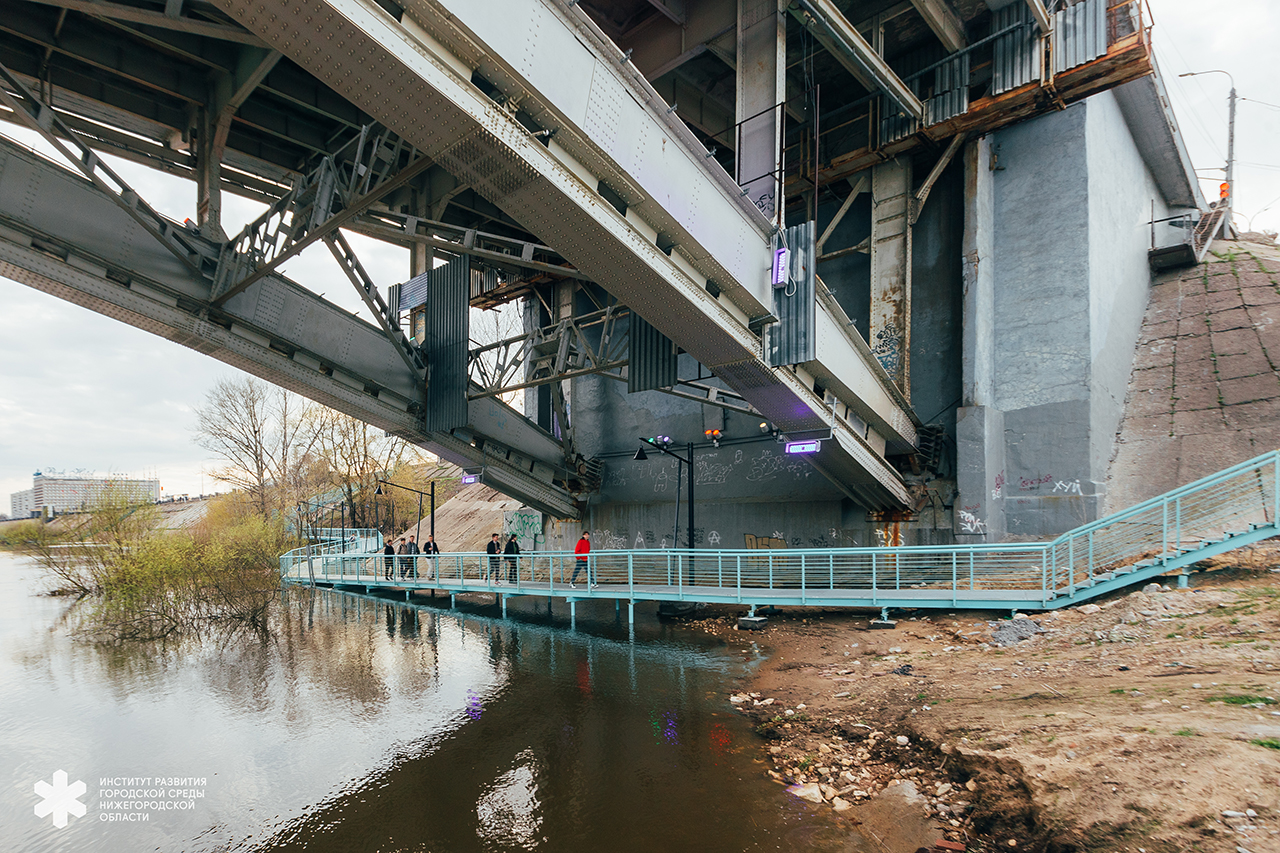 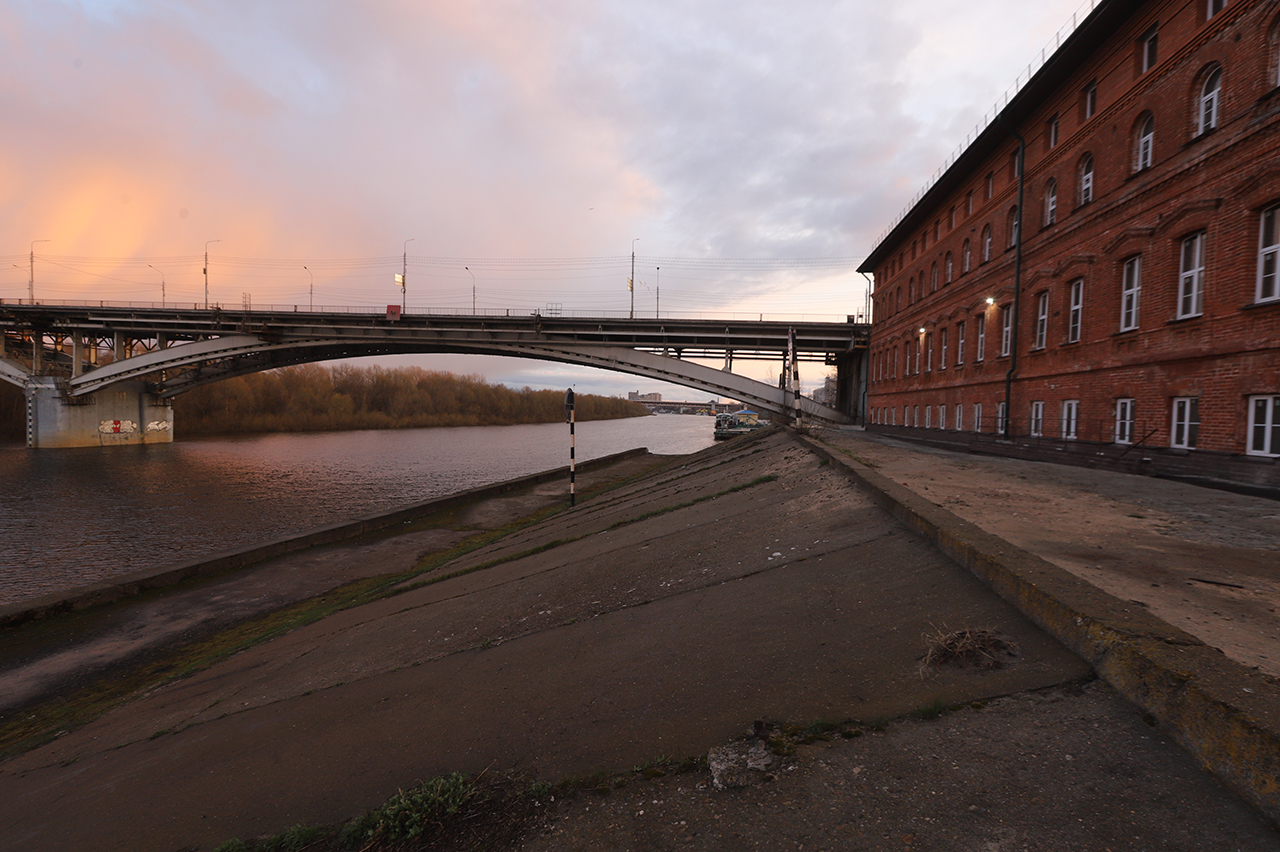 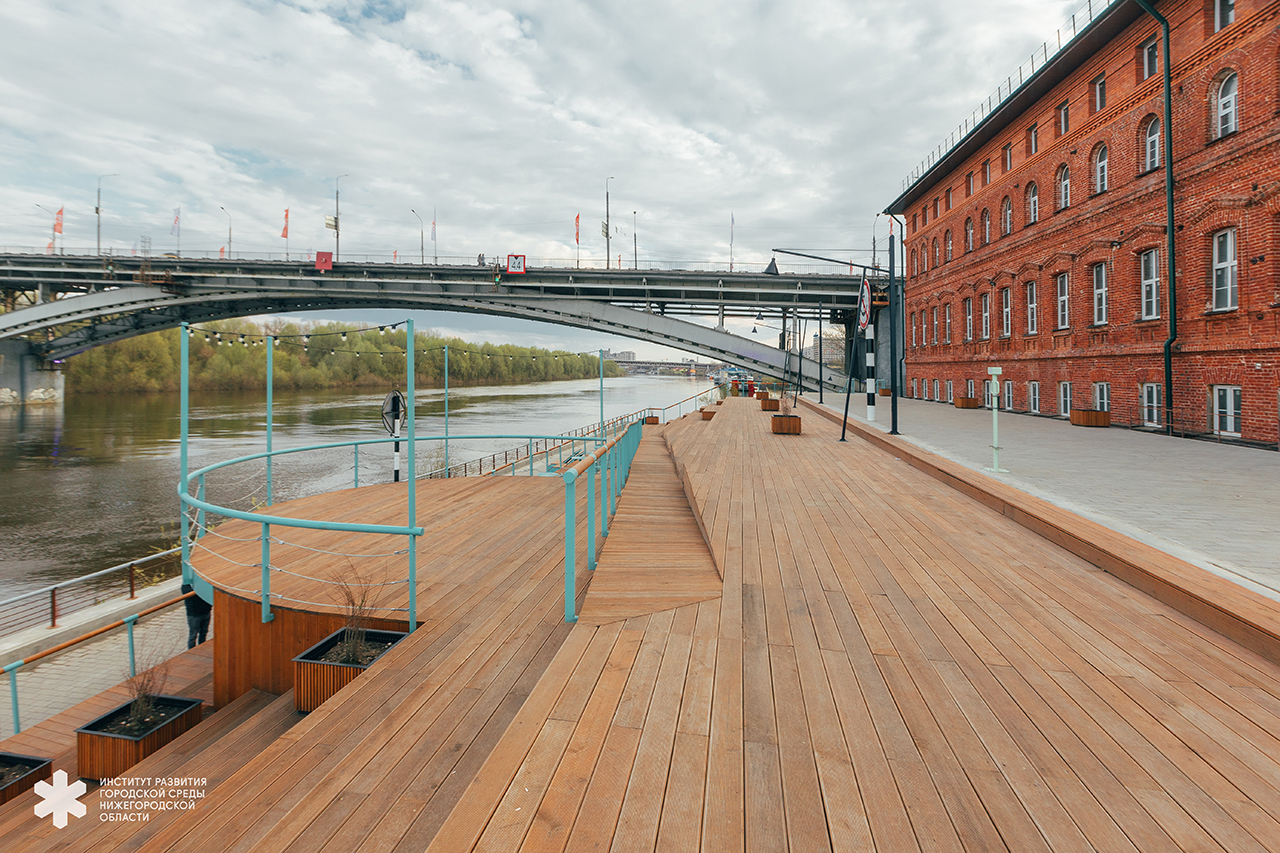 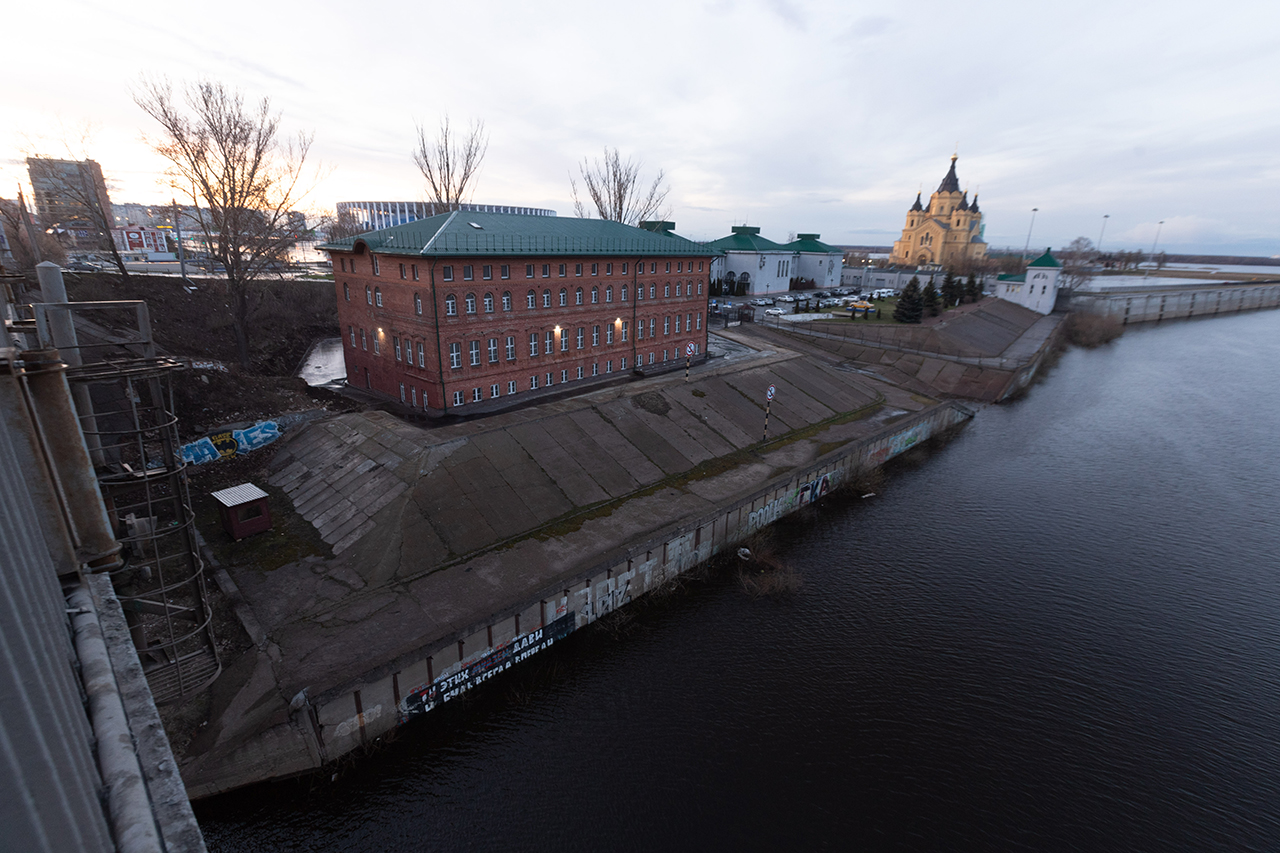 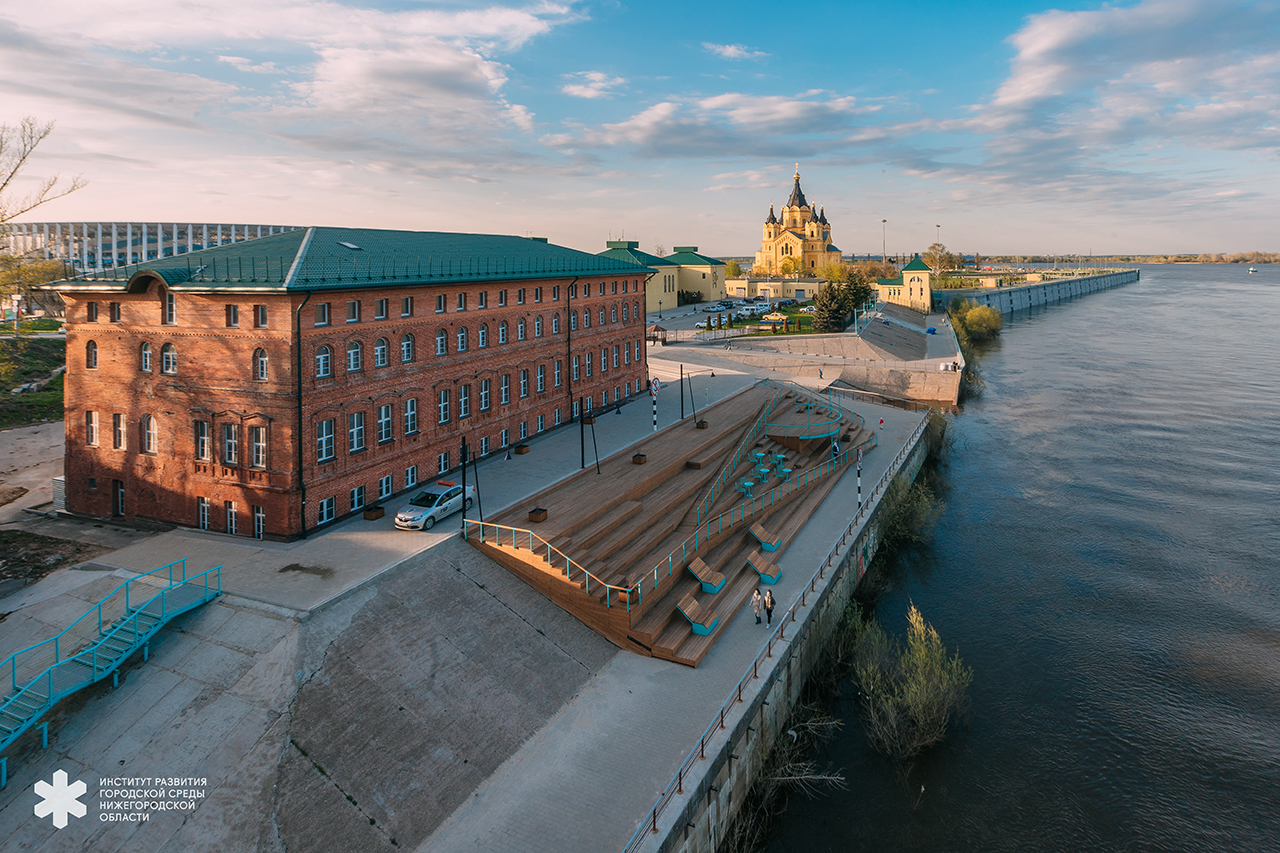 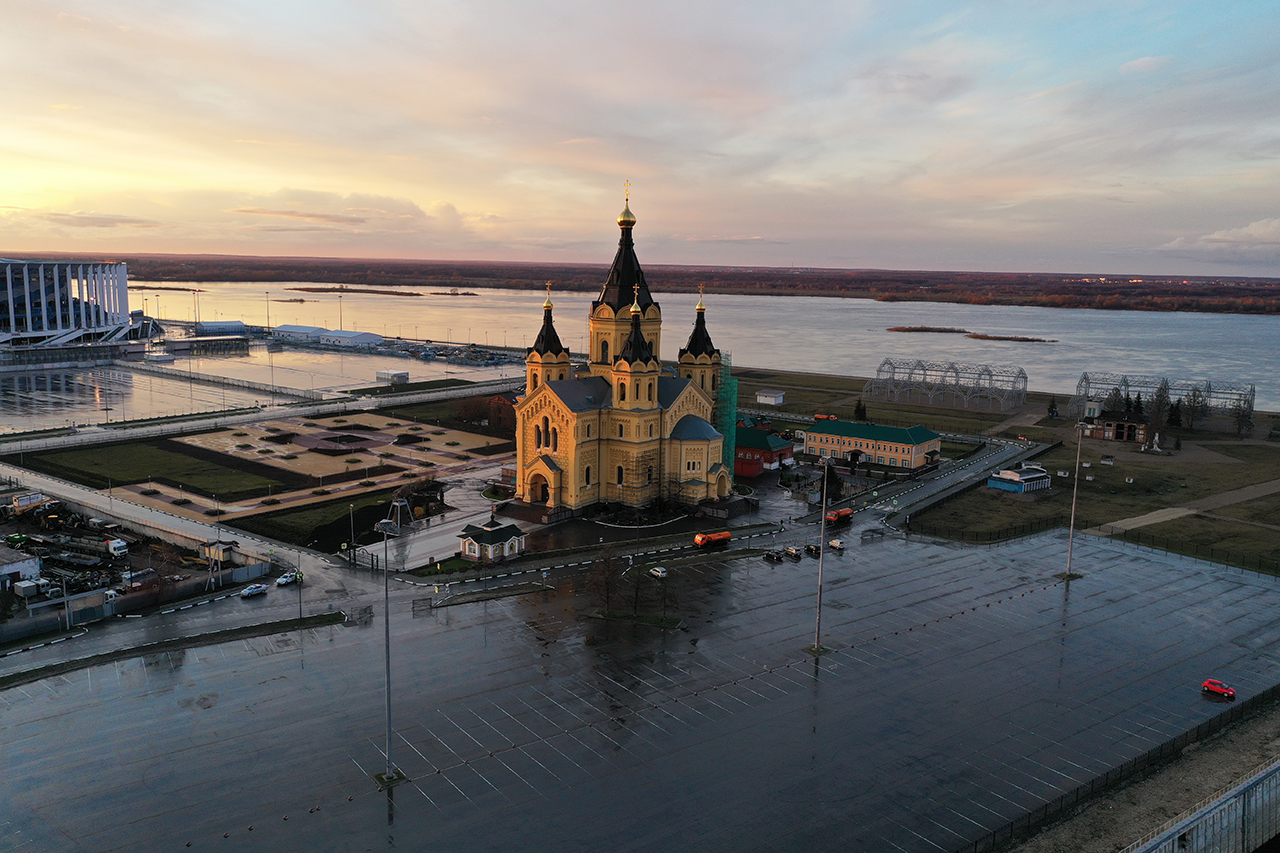 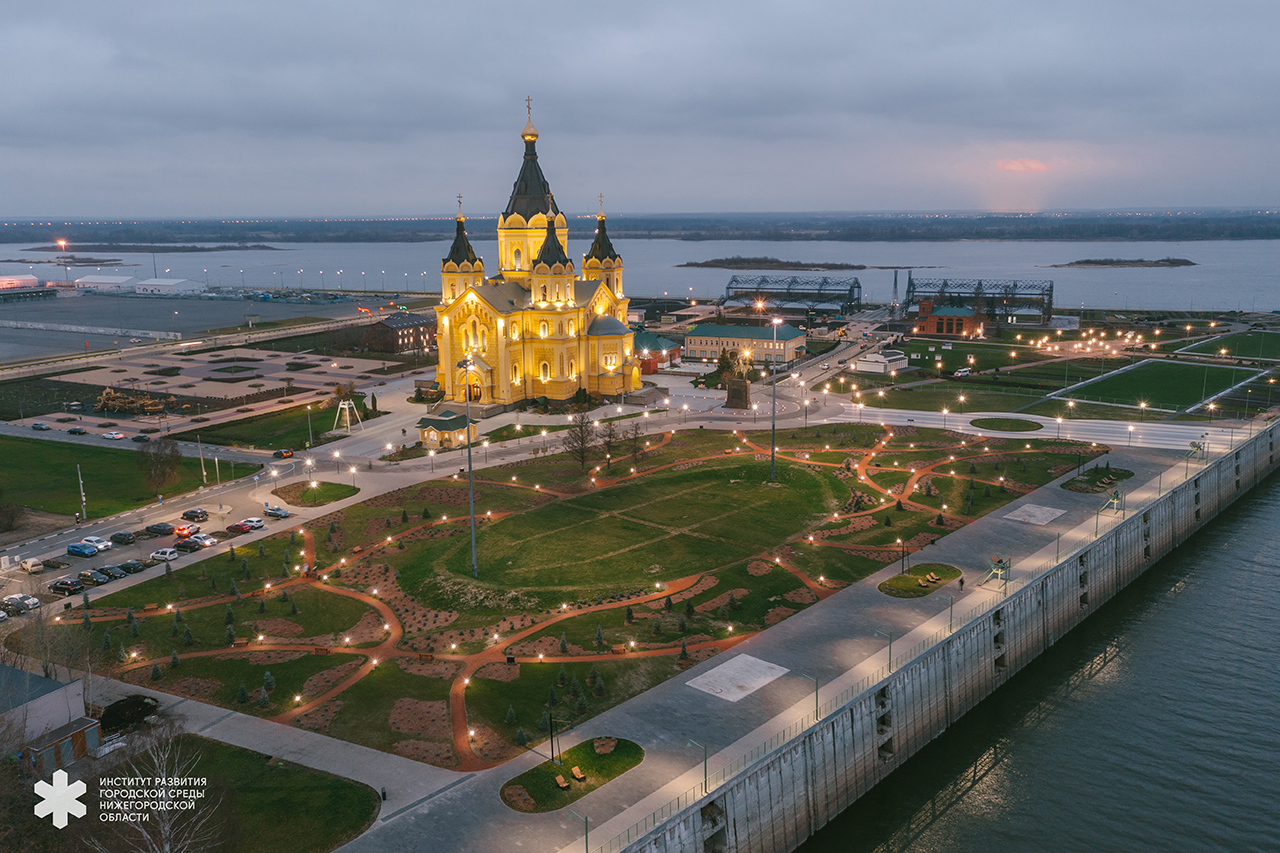 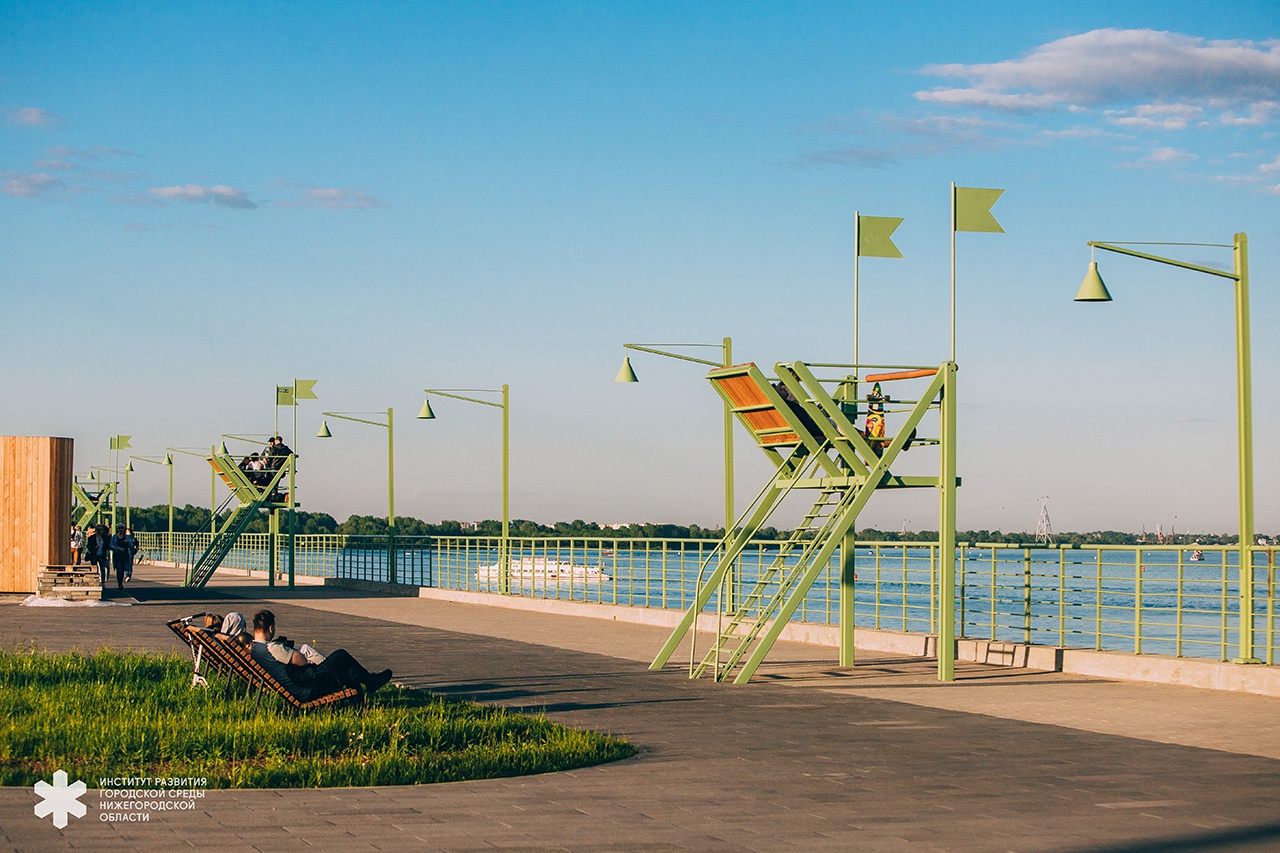 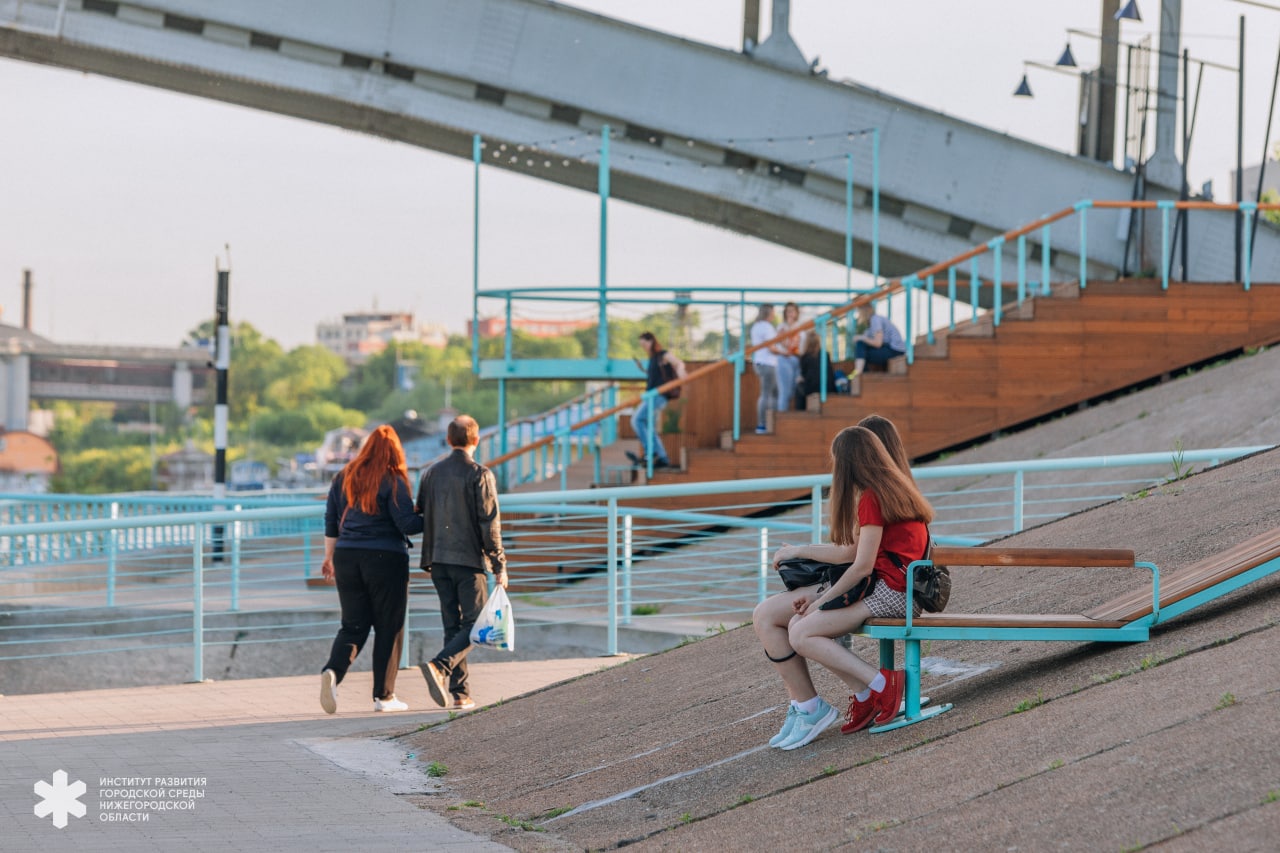 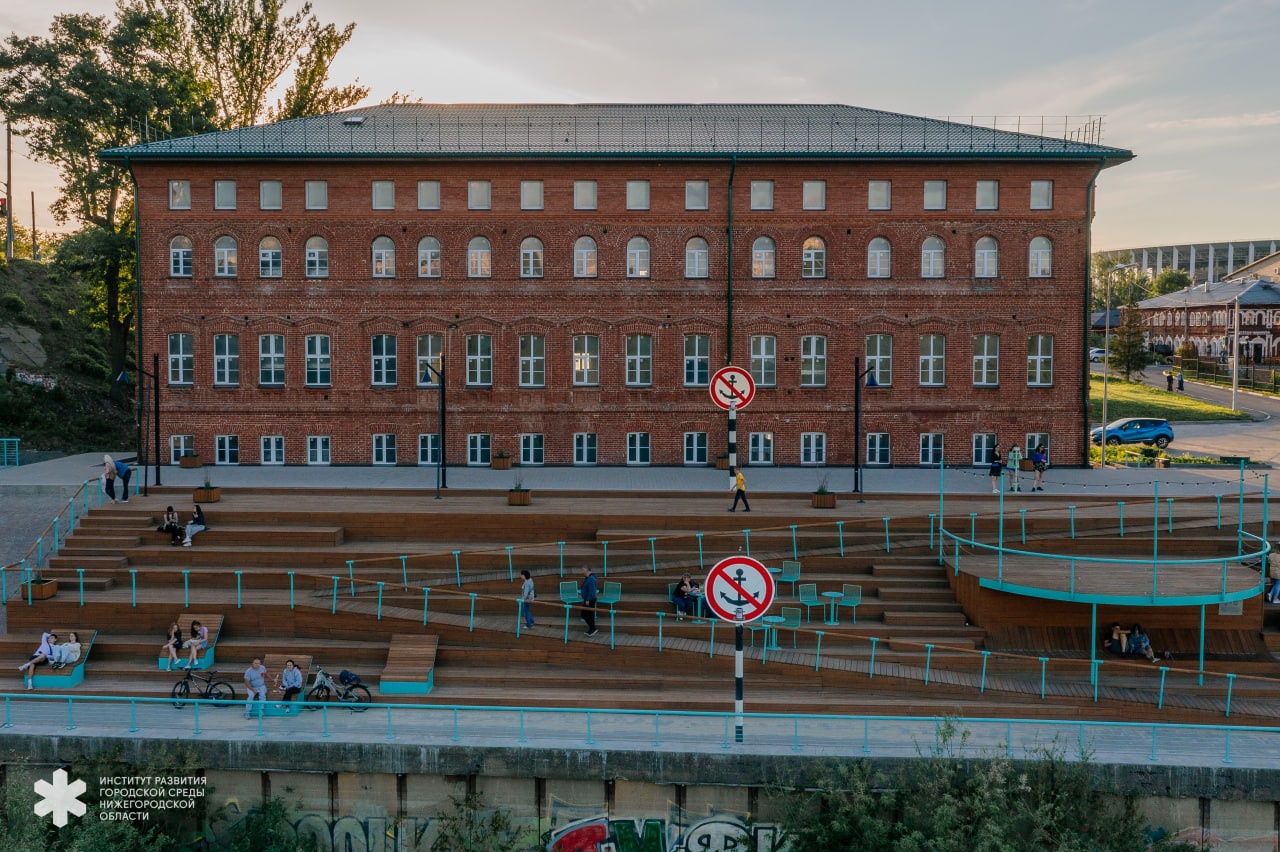 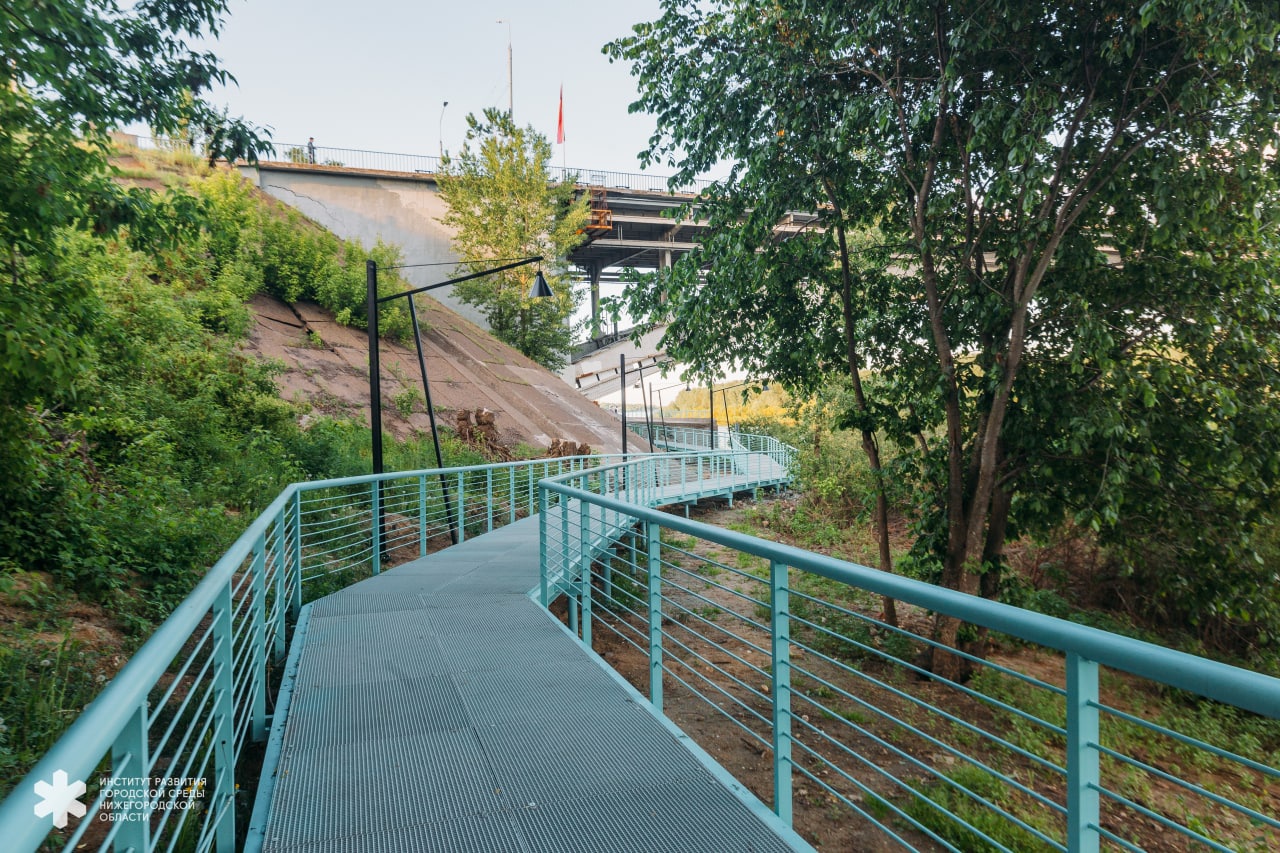 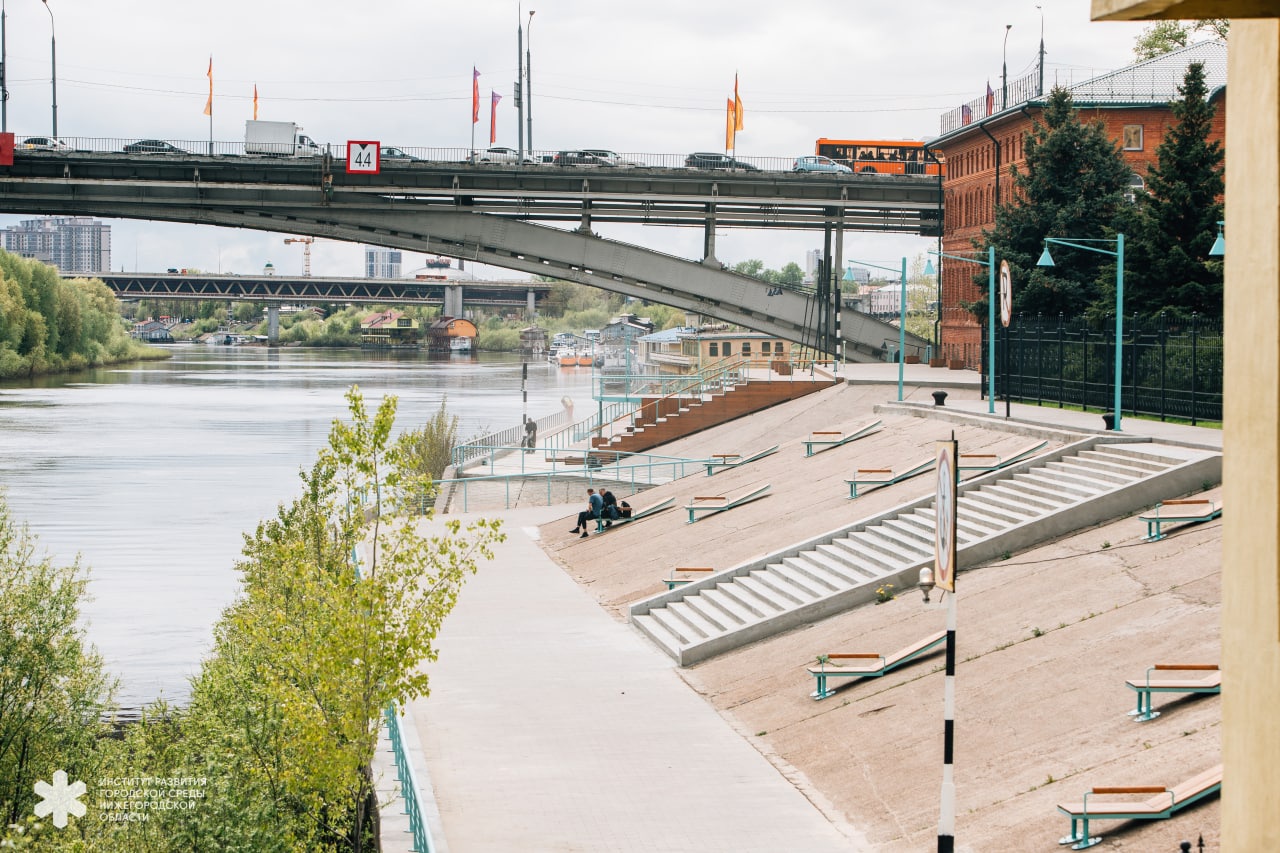 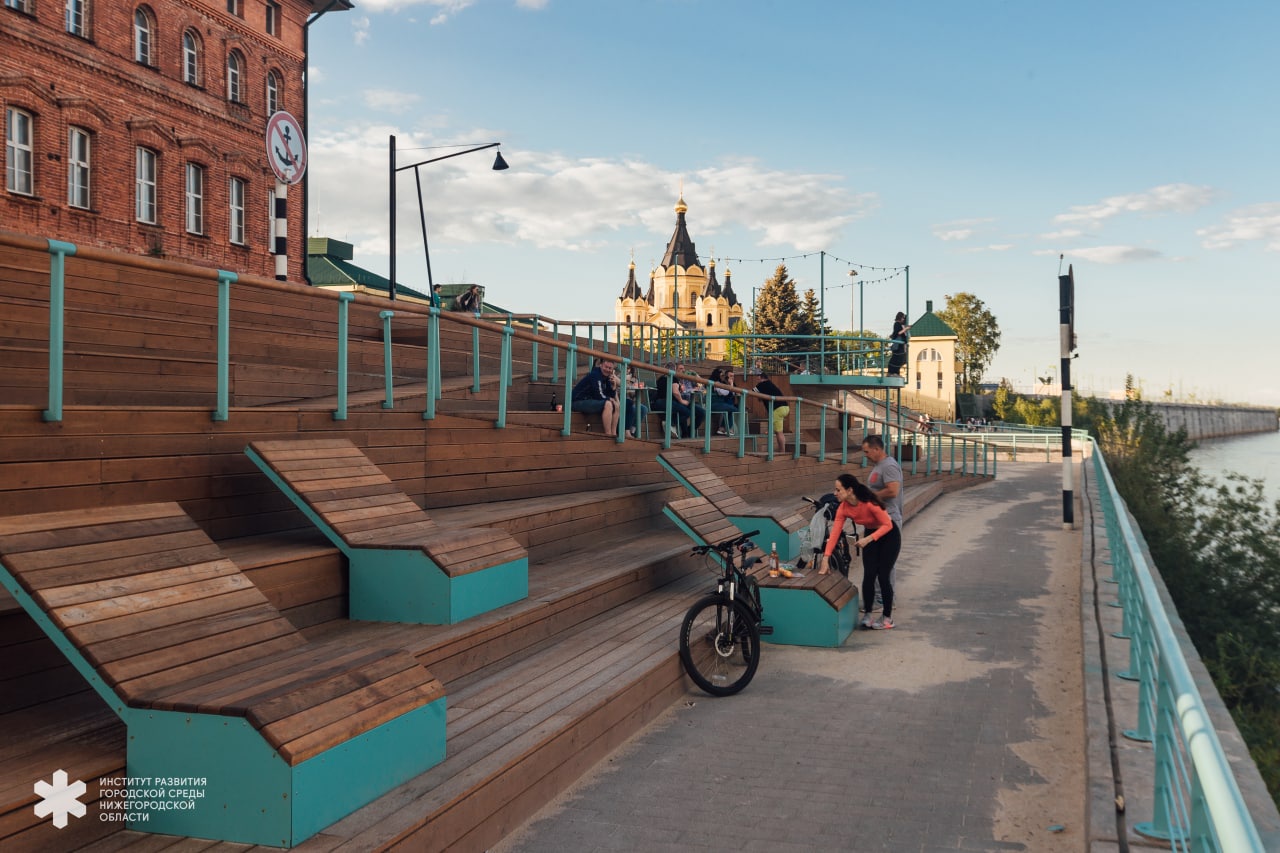 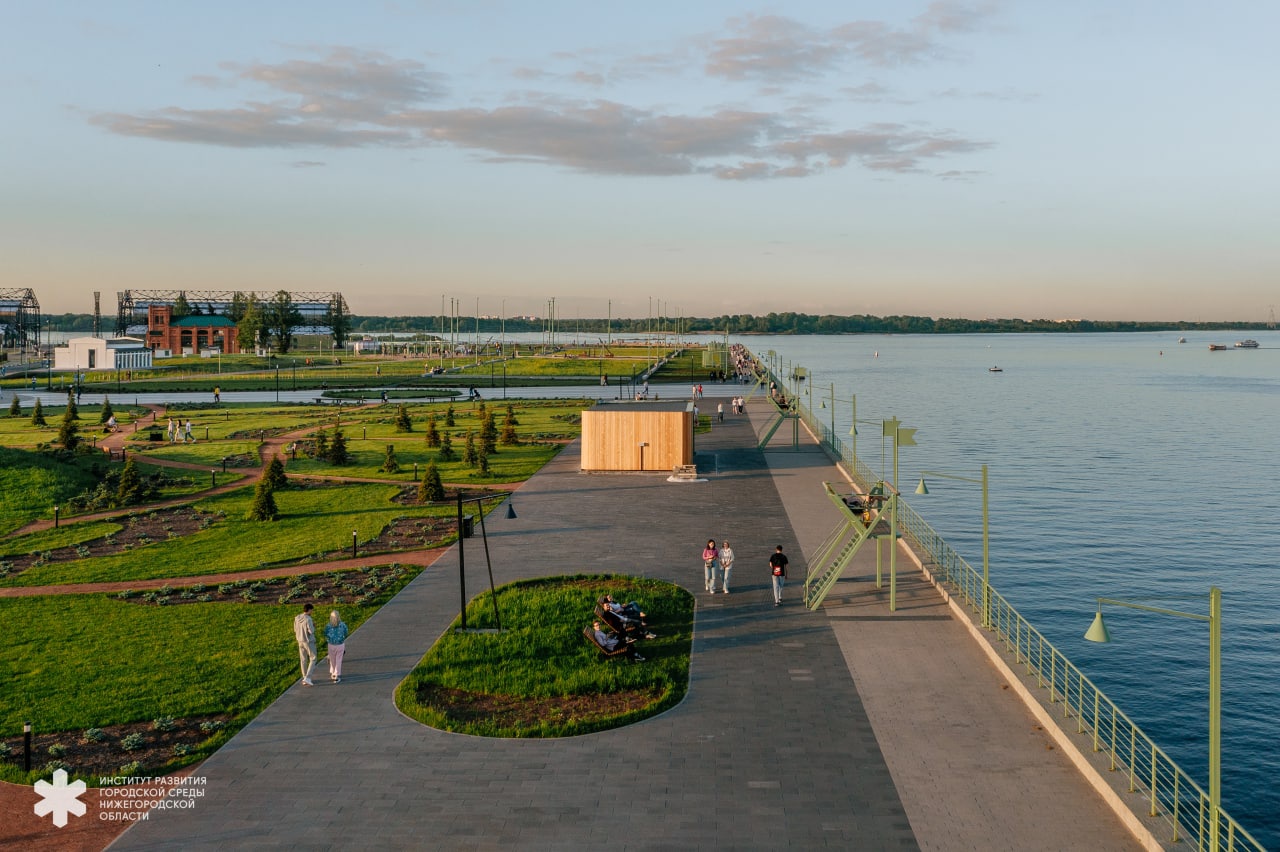 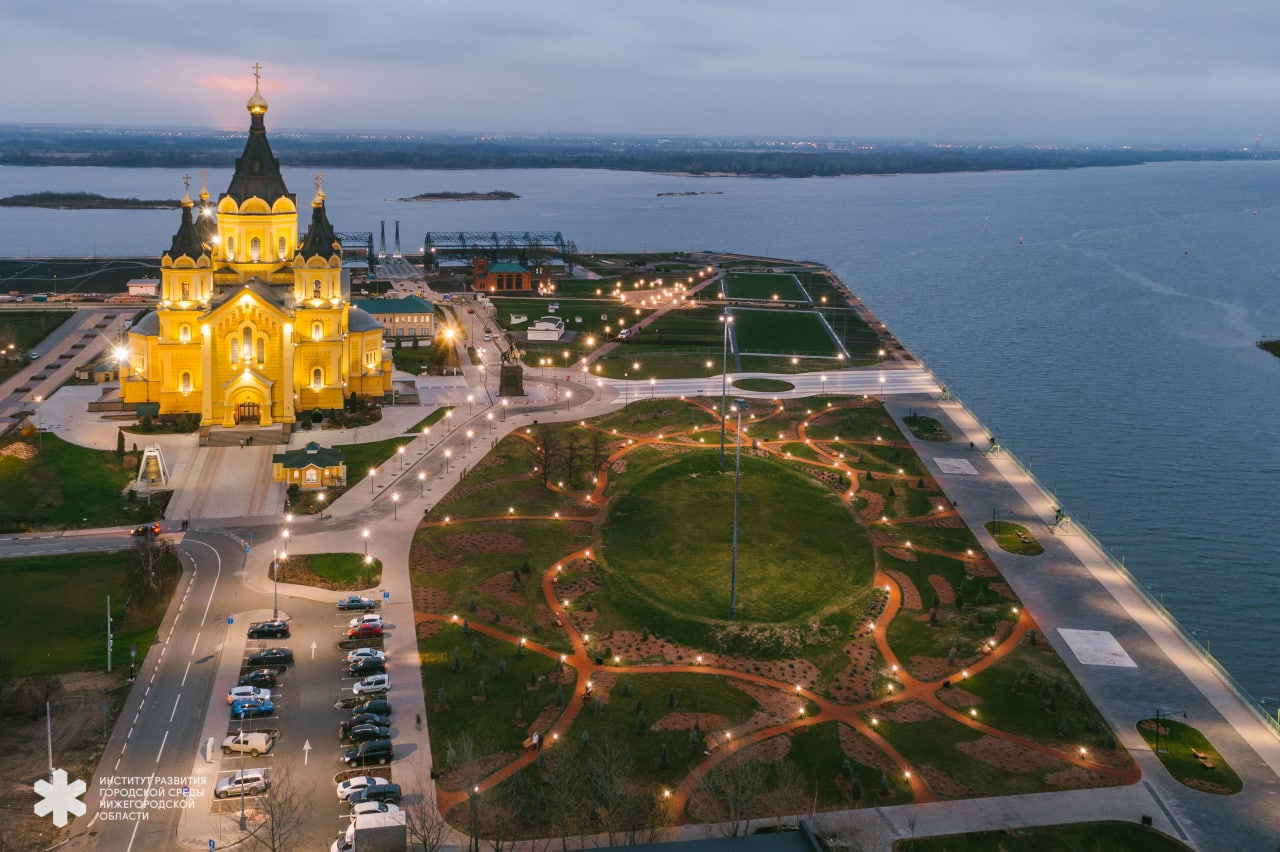 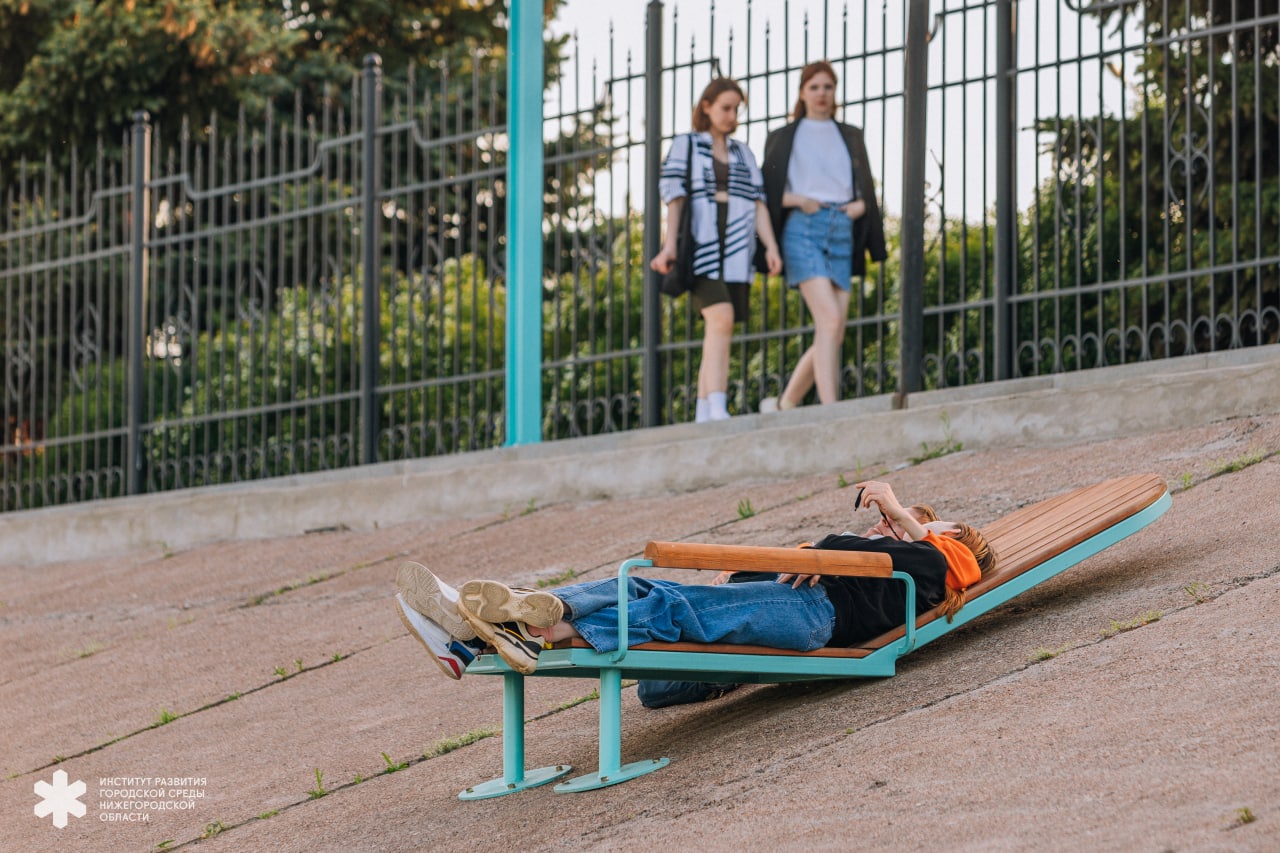