Borodino is a city in the Krasnoyarsk Kray. The city has an active policy of culturalization of the population: there are numerous circles and schools, and since 2014 Borodino has been the cultural capital of the Krasnoyarsk Kray. But despite this, Borodino, like many other single-industry towns, is included in the category of «single-industry municipalities of the Russian Federation», in which there are risks of deterioration of the socio-economic situation. This is primarily due to the lack of prospects for the population, an uncomfortable environment and an insufficient quality of life.

Within the framework of the project, two sections were developed - the area near the Ugolshchik recreation center and the boulevard between Gogol, Mayakovsky, Sovetskaya and Oktyabrskaya streets. These are the most important points for the city. The square is the center of social events and celebrations. The boulevard not only communicates with the square near the Palace of Culture, but is also an important recreational and leisure point in the residential part of the city. Both territories influence the formation of the overall impression of the city and are actively used by the population, and therefore need renovation.

situational plan of the city

The concept is based on the desire to link several important urban areas into a single route - citizens will be able to move freely and diversify their leisure time.

The main diagonal from the square near the Ugolshchik recreation center (1) runs through the city center to the boulevard (2). The second important axis is the existing boulevard, ending with a memorial to the Great Patriotic War (3). Three important points form a central triangle of axes, which must be emphasized when forming an urban structure.

In addition to the functions laid down on the boulevard, a large number of residential buildings, both private and multi-apartment, are located around the territory; several kindergartens and schools; retail outlets and cafes. All these objects attract people, so the territory will be in demand in the future, not only due to the inherent functions, but also due to its location.

Positioning. Basis of the concept of the project proposal:

The territory has several features: from the north it is closely adjacent to the private residential sector, from which it is necessary to separate with a green buffer zone. Also in the layout, inside the boulevard paths, it is important to emphasize the main diagonal running from the southwest to the northeast, directed towards the Ugolshchik recreation center. The boulevard has several entrances from different sides, so the main activity area is located in the center, at the intersection of the entrance lines and the main diagonal. Finally, along the edges of the boulevard, there are existing activity points that are equally important to consider when planning.

The lighting concept emphasizes the main direction and the thru-axle. Additional areas are lit with a different type of luminaire, less bright and not so high. Decorative illumination of herbs creates intimacy and coziness, filling the space well. 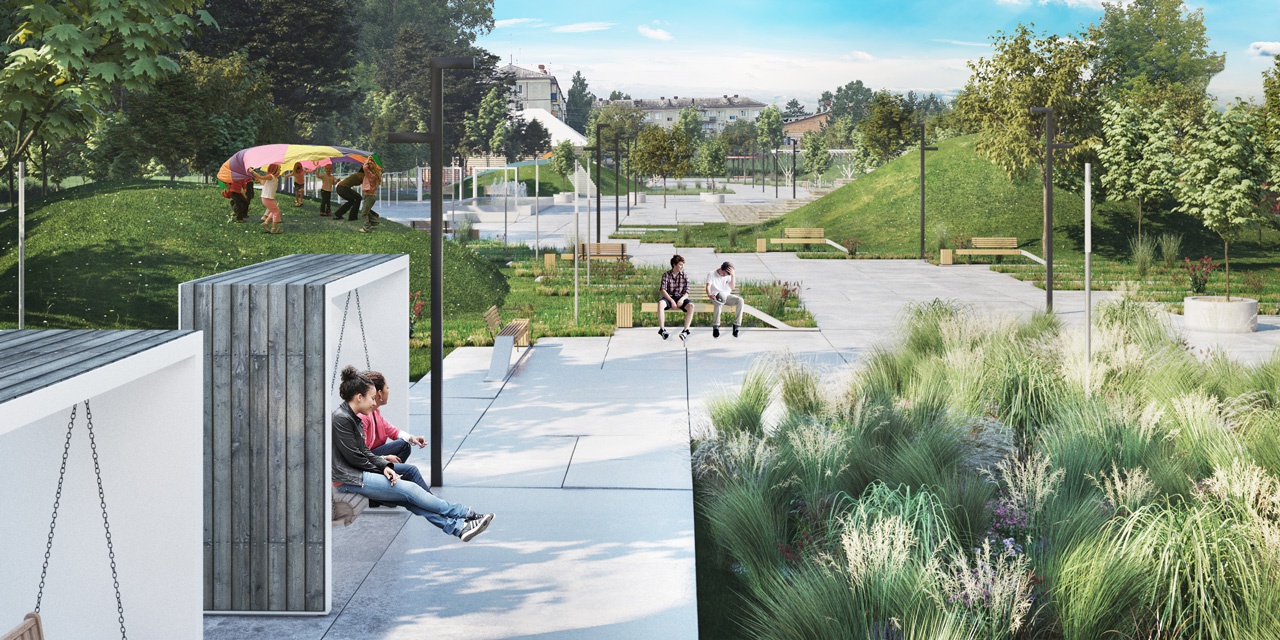 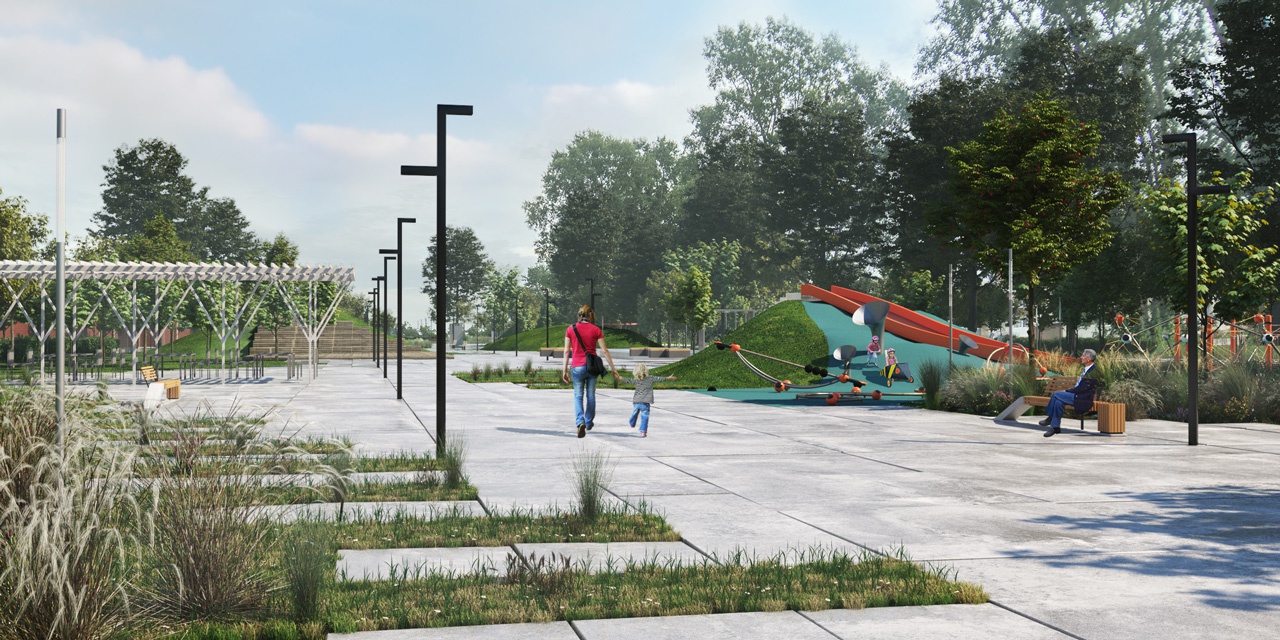 Square near the recreation center «Ugolshchik»

The area near the recreation center «Ugolshchik» has a great importance for the city. This is not only the central place where all the main events take place, but also the square, which is adjacent to the amusement park. Created back in the Soviet years, now the square is morally outdated and does not meet the needs of the city. There is not enough equipment for various events, and the layout is not designed to celebrate high-profile celebrations with a large number of people.

Positioning. Basis of the concept of the project proposal:

The most competent way to distribute a large number of pedestrian flows is to use an area based on a circle. In addition to the convenient use by pedestrians, the arrangement of pavilions perfectly fits into this concept. For example, a cafe is conveniently located and has the ability to serve not only those on the square, but also people passing by. At the same time, street tables are separated from people in the center of the square and do not interfere with events. There are also other functions that attract people during the absence of citywide holidays - petanque, a pavilion with tables for playing chess and board games, a swing, a fountain, an amphitheater and others. Globally, the square is divided into two parts: the right one is an active recreation area, the left one is a quiet, more peaceful recreation area. And to give the area a coziness, it is proposed to plant plants that do not require constant close maintenance and annual planting. These are meadow grasses that look good both in summer and winter. 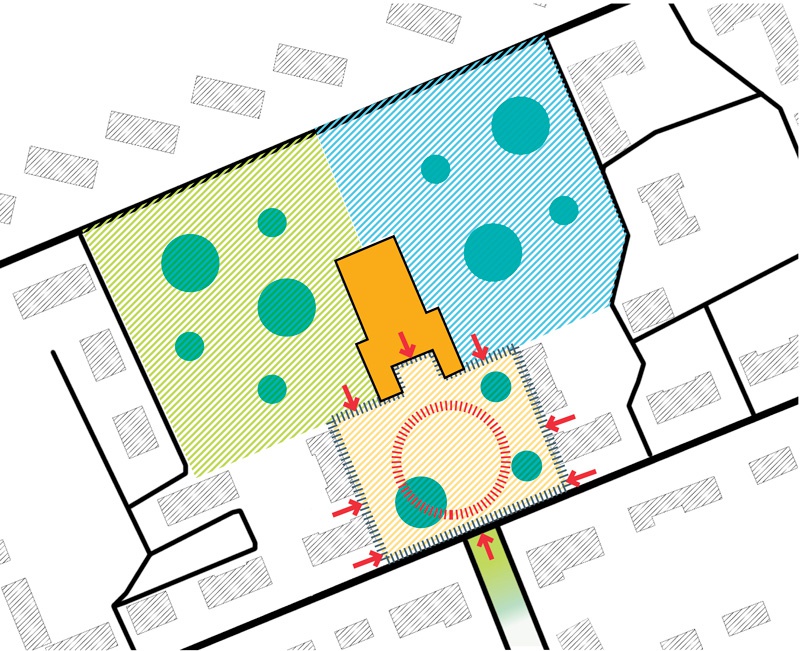 Recommendations for the functional filling of the park next to the square:

From the point of view of functional zoning, the amusement park is divided into two semantic parts by analogy with the square: a youth, more active part with equipment designed for middle-aged children (8-14) and adolescents (15-17); children (1.5–5.5). Due to the fact that the area of the park is not very large, the creation of long walking routes in this area is not possible, therefore the concept of an «active use park» with a denser and more saturated plan structure functions well here. 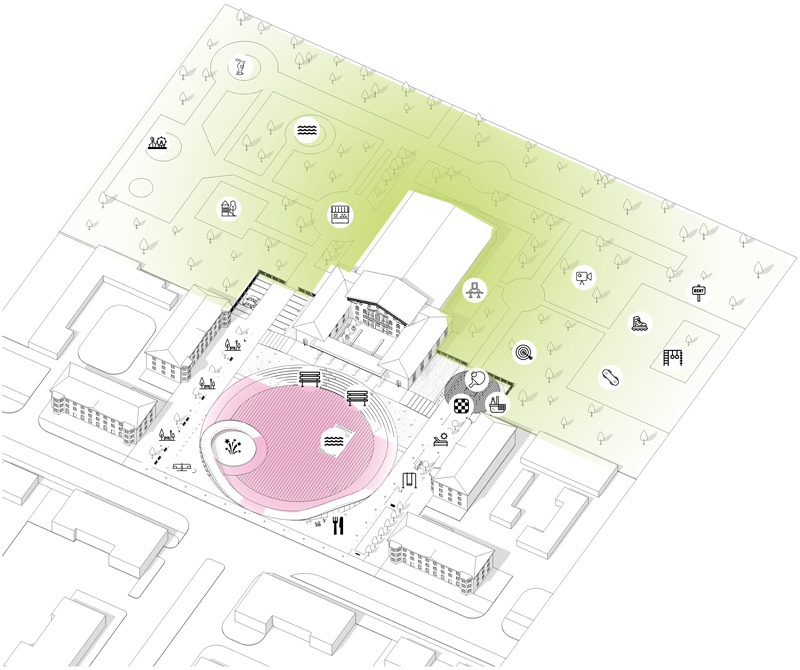 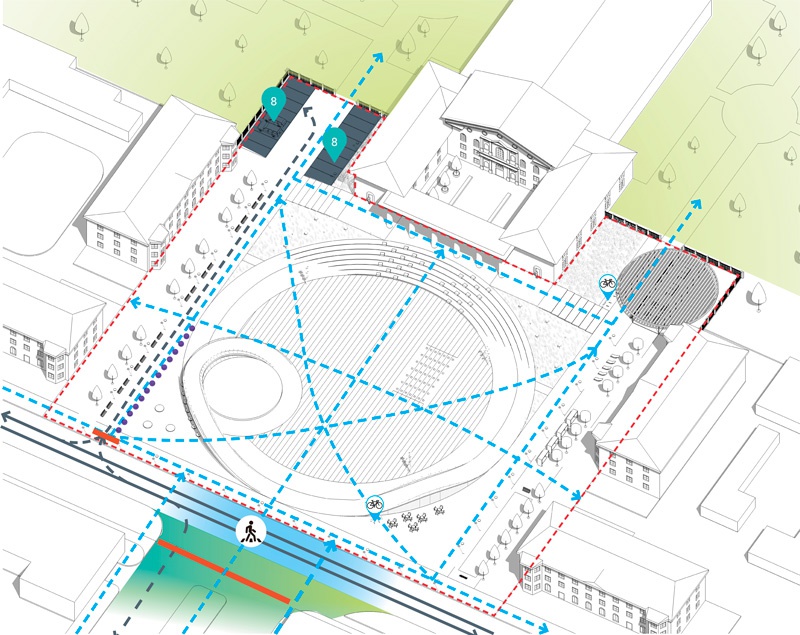 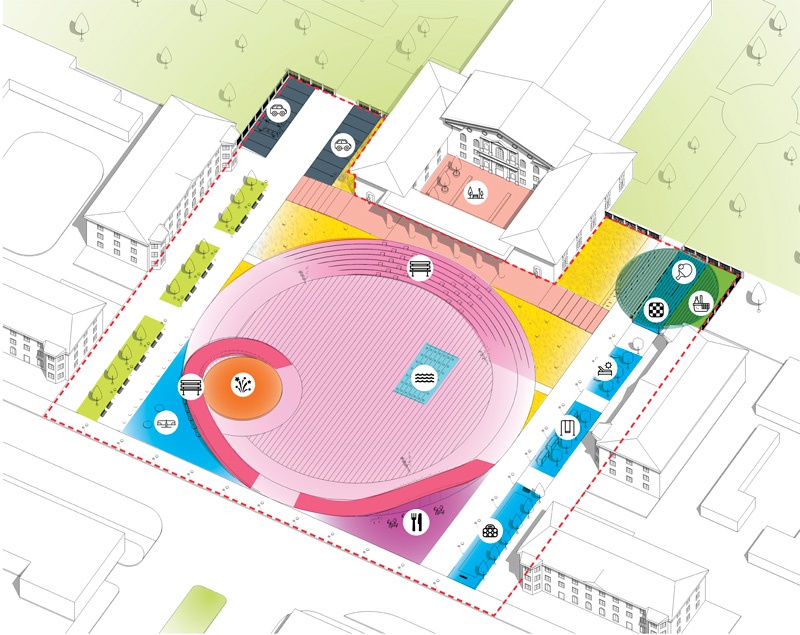 Scheme of organizing the area in winter:

In winter, a skating rink with equipment rental and a stage is organized in the center of the square. There is a Christmas tree on the podium, and festive parties are held on a temporary demountable stage. The skating rink can serve as a platform for small performances that can be watched from the amphitheater. And on the edge of the square, next to the equipment rental, there is a temporary Christmas market. 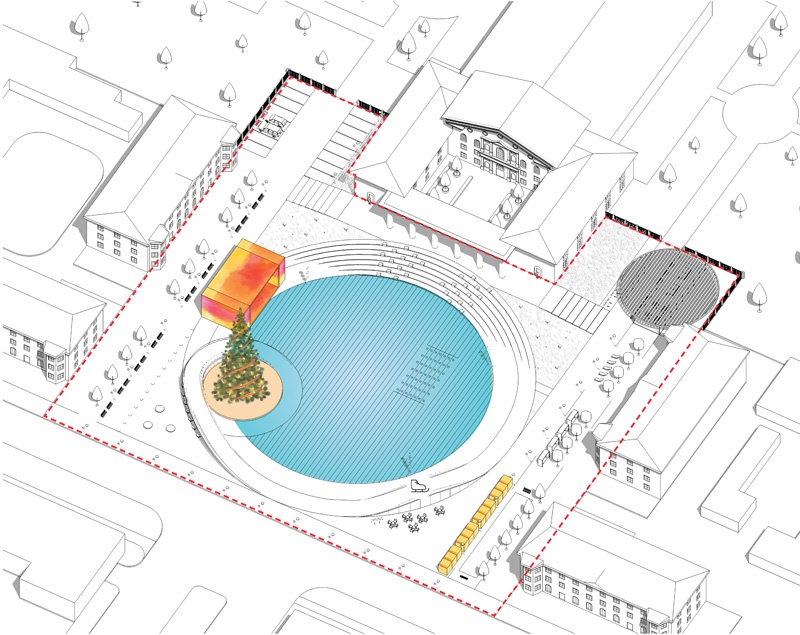 The lighting installed in the square is designed for different scenarios of use. Colored backlit fountains for evening events and the general atmosphere of the square. The main light around the perimeter, evenly illuminating the paths and entrances to the park. Illumination that illuminates the herbs and creates coziness. And finally, spotlights illuminating the central core of the square. 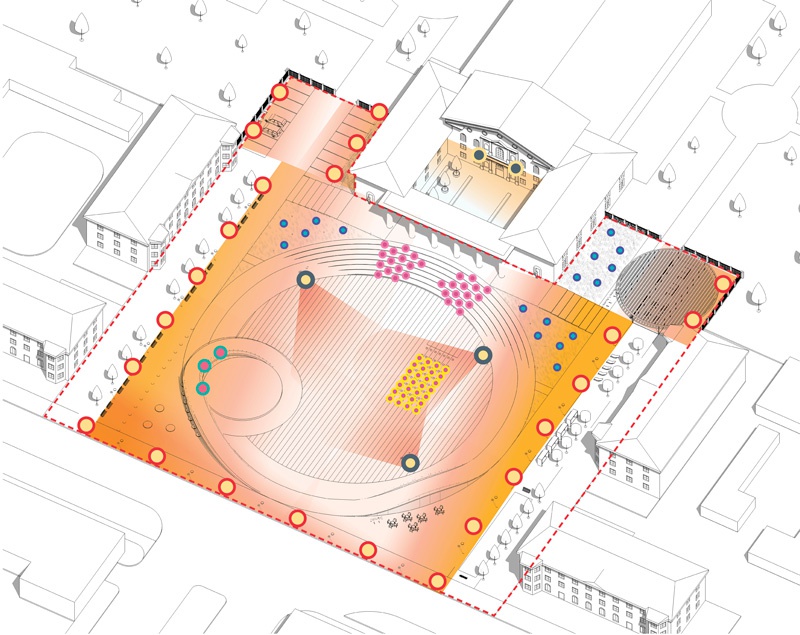 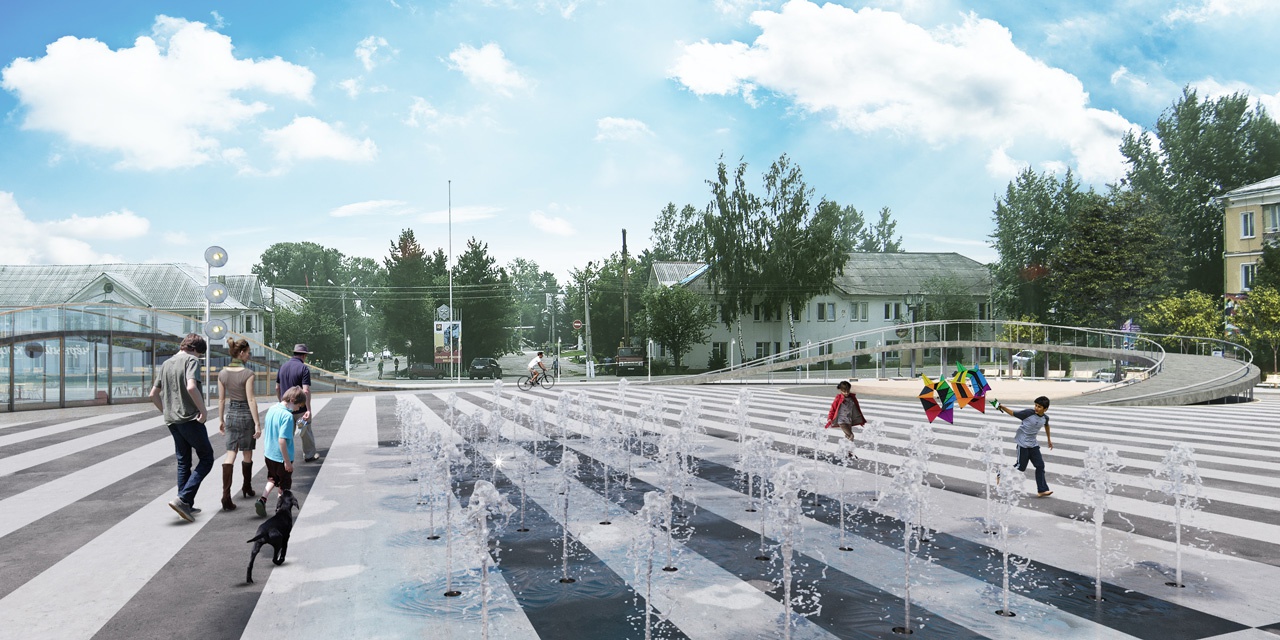 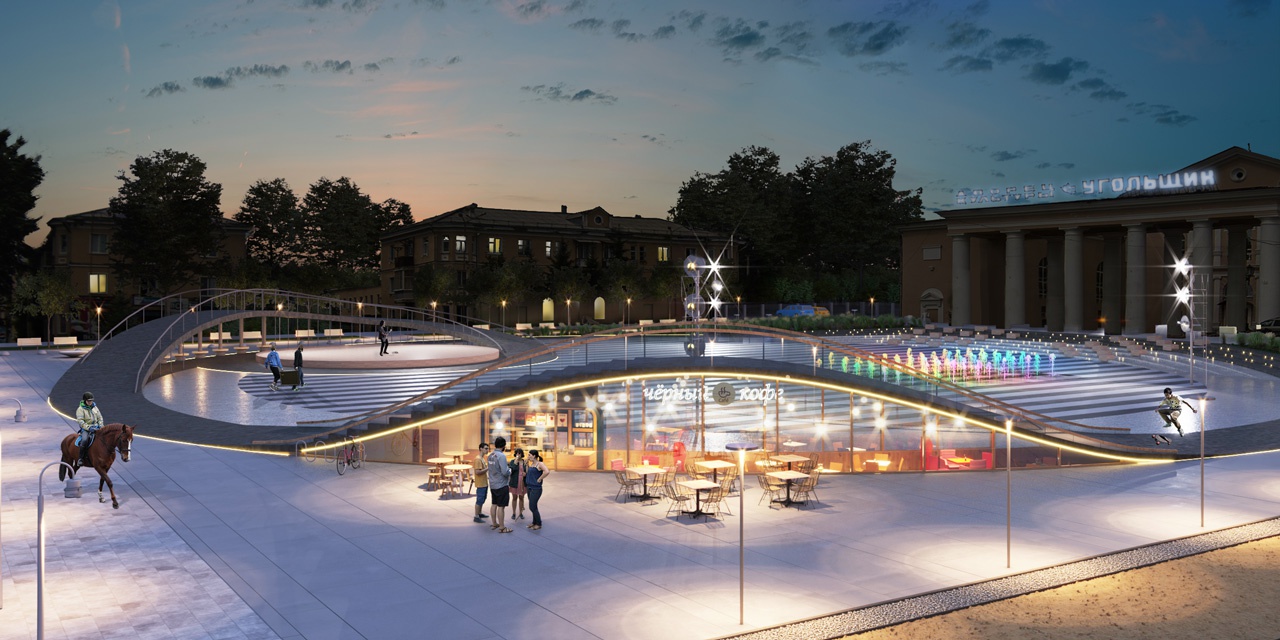 square in the evening