The Square of Academician Vishnevsky is located in Nagorny neighbourhood, next to the old cinema building of ИAngara’. This is a prominent location within the area and one of the sunniest places available to pedestrians.

After the cinema was shut down, the square lost most of its users and its earlier smart appearance as well. A few years ago a pond in the centre of the square was restored through the initiative of
the local residents. Despite this, Vishnevsky Square failed to become a point of attraction for the locals due to lack of functions and inconvenience of transit.

The main goal was not just to create an urban environment, but to interact with the local community and to try to create something together. The project will have no future unless we get local people involved and make them take the lead.

Photographs of the site:

The first impression of the square: huge empty space and a feeling that almost any element in it is an obstacle. A good many people and they are all doing their thing, but all their movements tend to be linear. 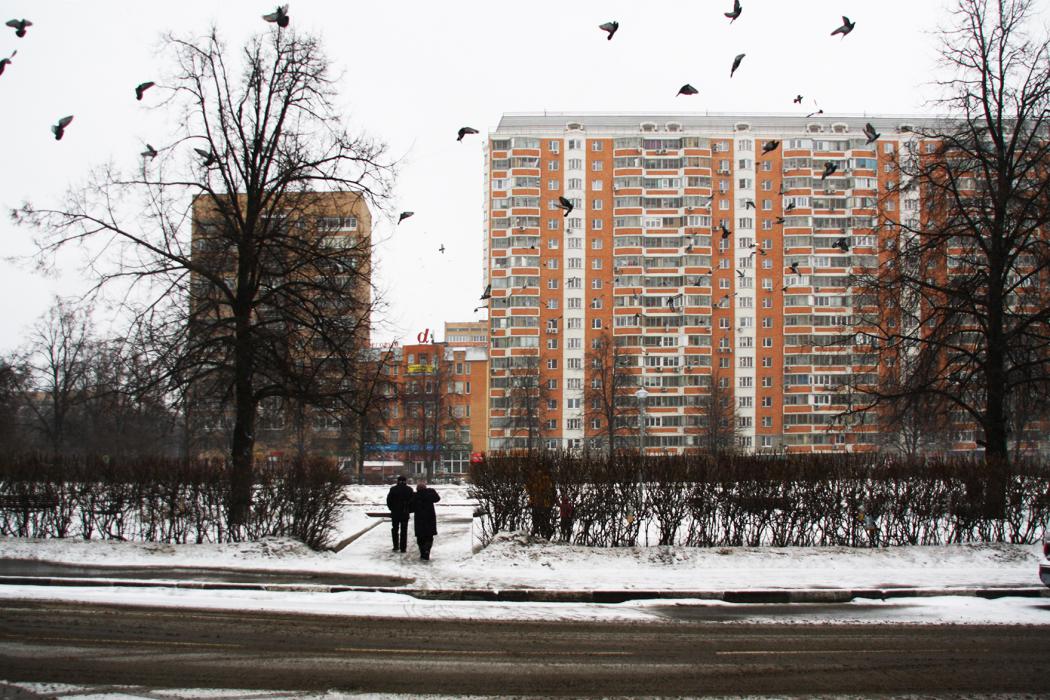 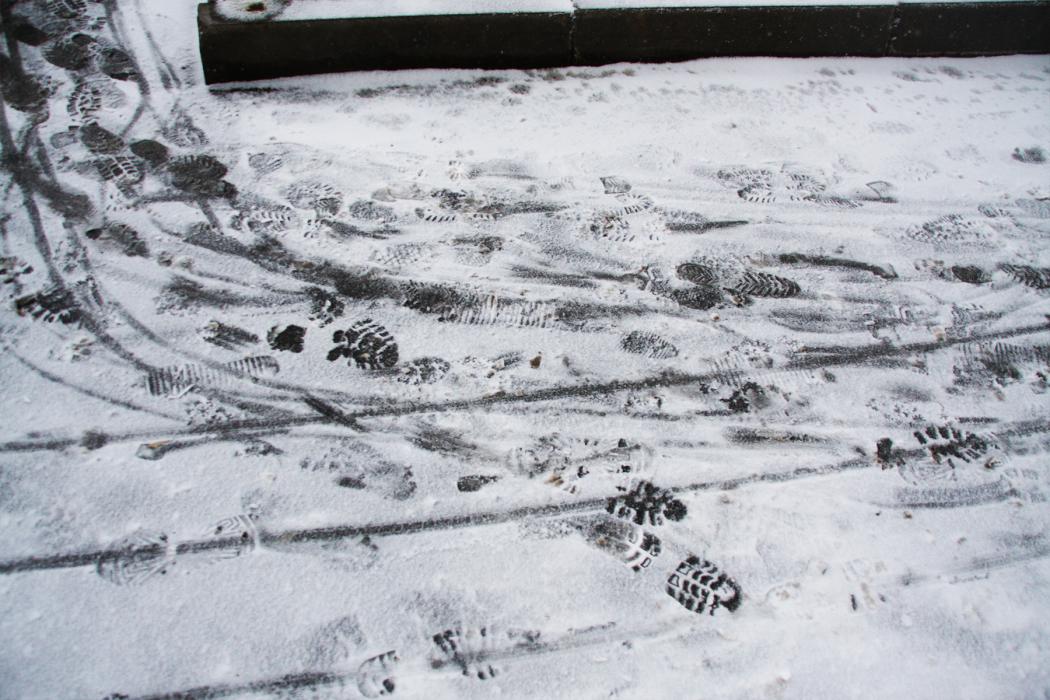 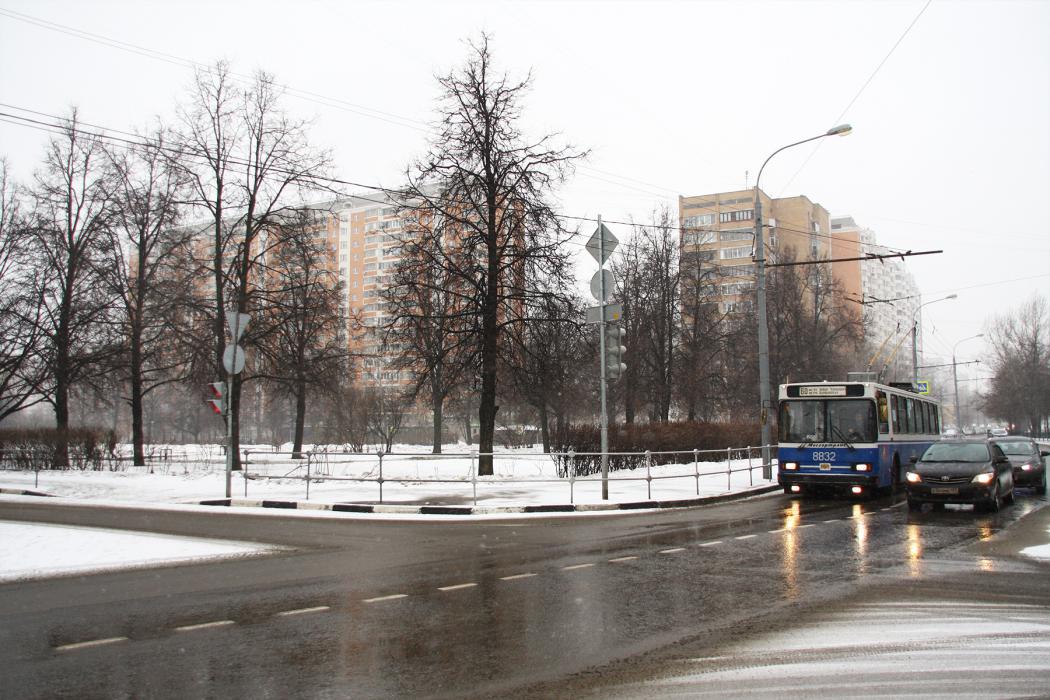 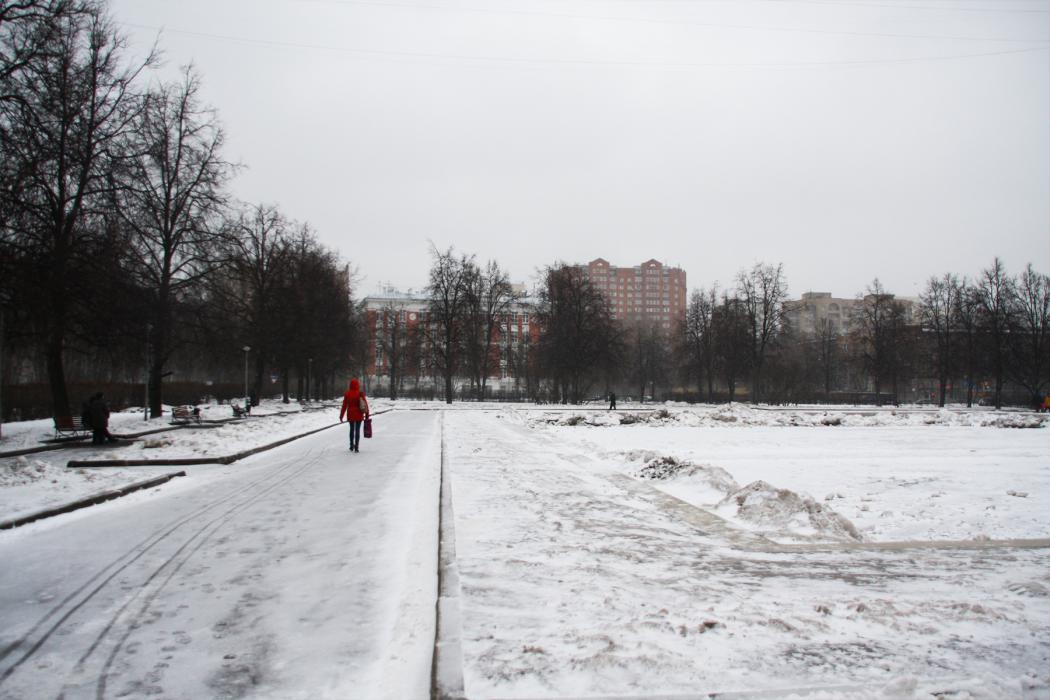 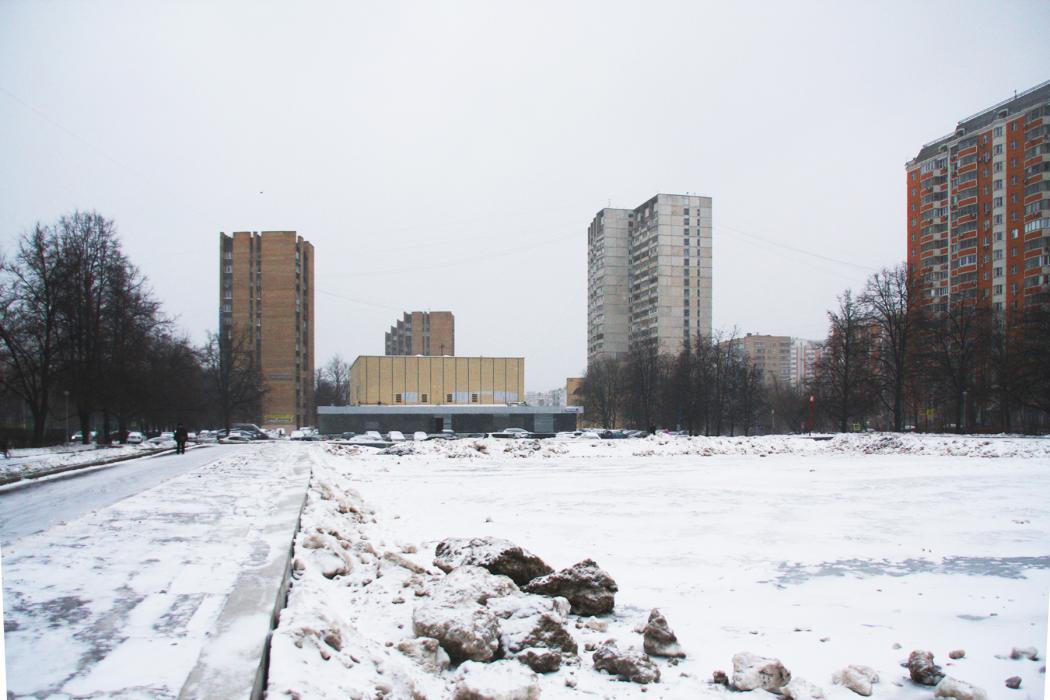 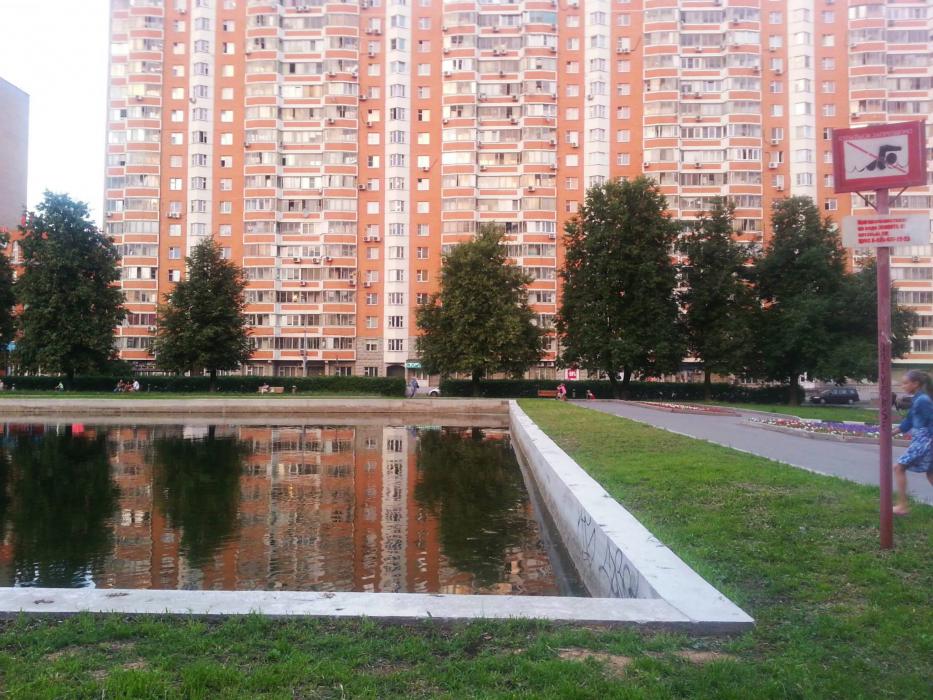 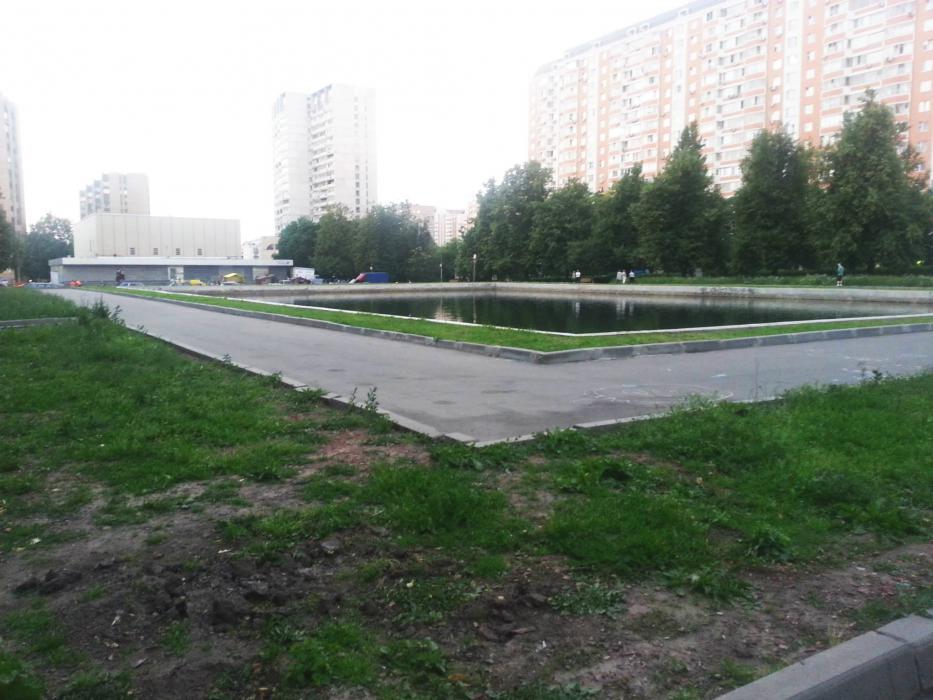 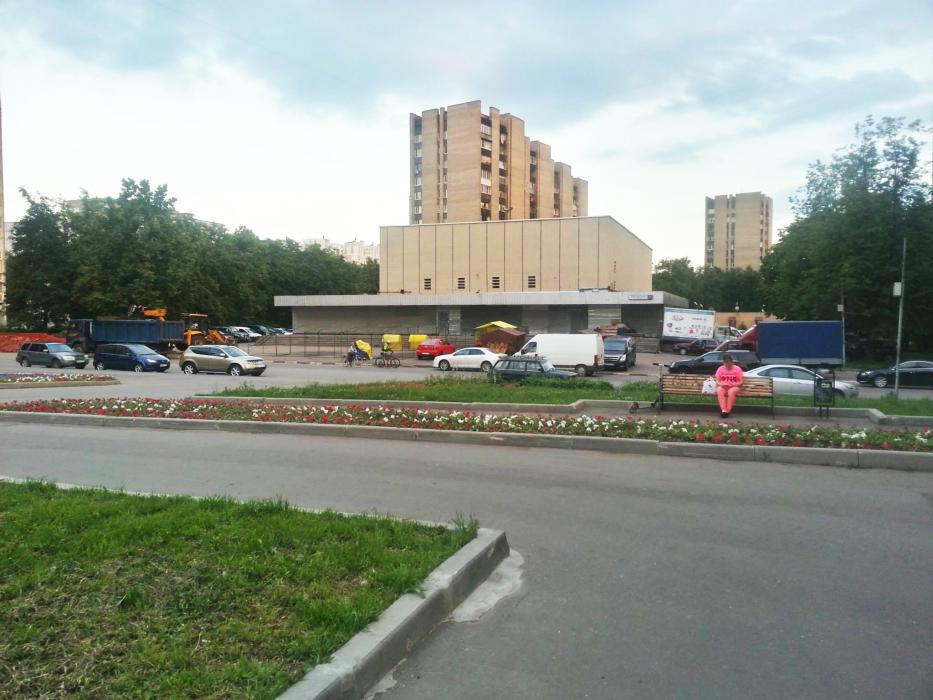 The figure shows the importance of the existing functionality of the site. The neighbourhood cannot boast a lot of open public space, or cinemas, or water reservoirs in particular. However, the vegetation on the square supports the connection between two alleys.

The square is surrounded mainly by residential buildings, schools and kindergartens. A lot of shops located on the ground floor of the nearest buildings face the square. However, the only cluster of leisure and entertainment facilities in the neighbourhood is a shopping centre next to the subway station.

The neighbourhood was mainly built after the war in the late 50s. The 17-storey buildings facing the square appeared later, they are made of prefabricated concrete slabs commonly used in the 2000s. There are no historical or cultural heritage sites in the neighbourhood.

The square is mildly shadowed both in winter and in summer. It will be comfortable to spend a lot of time in such space, during summer months in particular, to be engaged in outdoor activities, either passive or active.

A pond is the centre of composition and a focal point. It has U-shaped lawns and paths floating around it. The only place to seat is on the benches around the perimeter of the square.

The square is easily accessible via transport. Around the perimeter there are some public transport stops.

The sides of the streets have various uses. The front is open and active, but is separated from the square both visually and physically by deep vegetation around the perimeter.

One of the square drawbacks is lack of transit. The square is designed in such a way that any route of a pedestrian becomes longer. The square is not convenient as a square.

The square did not manage to become a point of attraction due to lack of possible use. People should invent reasons to come to the square and invent activities.

After a long struggle it has been decided to sacrifice a mass of vegetation and lawns around the pond in favour of transit capacity and the square convenience. However, no existing trees were removed. In the place of the solid profile of bushes on the edge of the square there are linear islands of greenery. The territory thus becomes accessible for pedestrian transit. Those, who are in a hurry, can take a shortcut and use the bridge – its location is determined by the nearest public transport stops. A narrow pavilion acts not only as an entrance to the square, but protects from the excess noise and the road dust. The central axis is supported by symmetrical alleys on both sides of the pond, on which trees, armchairs and loungers are scattered evenly.

In winter, a frozen pond will be used as a skating rink, and the snow removed from it will make a nice hill. A Christmas tree can be placed right in the centre of the frozen pond, which will emphasize the square symmetry.

During the night, the square functions as well as during the day: in winter a Christmas tree and Christmas lights become the centre of attention, while during the rest of the year the embedded pavement lamps and lamp posts create an air of romance. Pavilion-through archways are illuminated as well, which makes them safe and inviting.

Instead of a large number of badly organized parking spaces we conceived a parking area along the street. It is separated from the pedestrian area by green spaces. A long pavilion with a walk-through passage protects the square from the car noise.

On the side of the cinema there is a set of swings. It makes the square attractive for the younger generation, and creates a visual connection with the pavilion. Around the swings is the splash fountain.

At the entrance is the pavilion that stretches along the whole square. Long and narrow, standing on high elegant supports, it draws references to the architecture of classical collonades. The pavilion houses cafes and shops, and in the centre there is a walk-through portal of three arches connecting the square with the street. The rounded corners visually narrow the building and make the square more convenient for pedestrian transit. 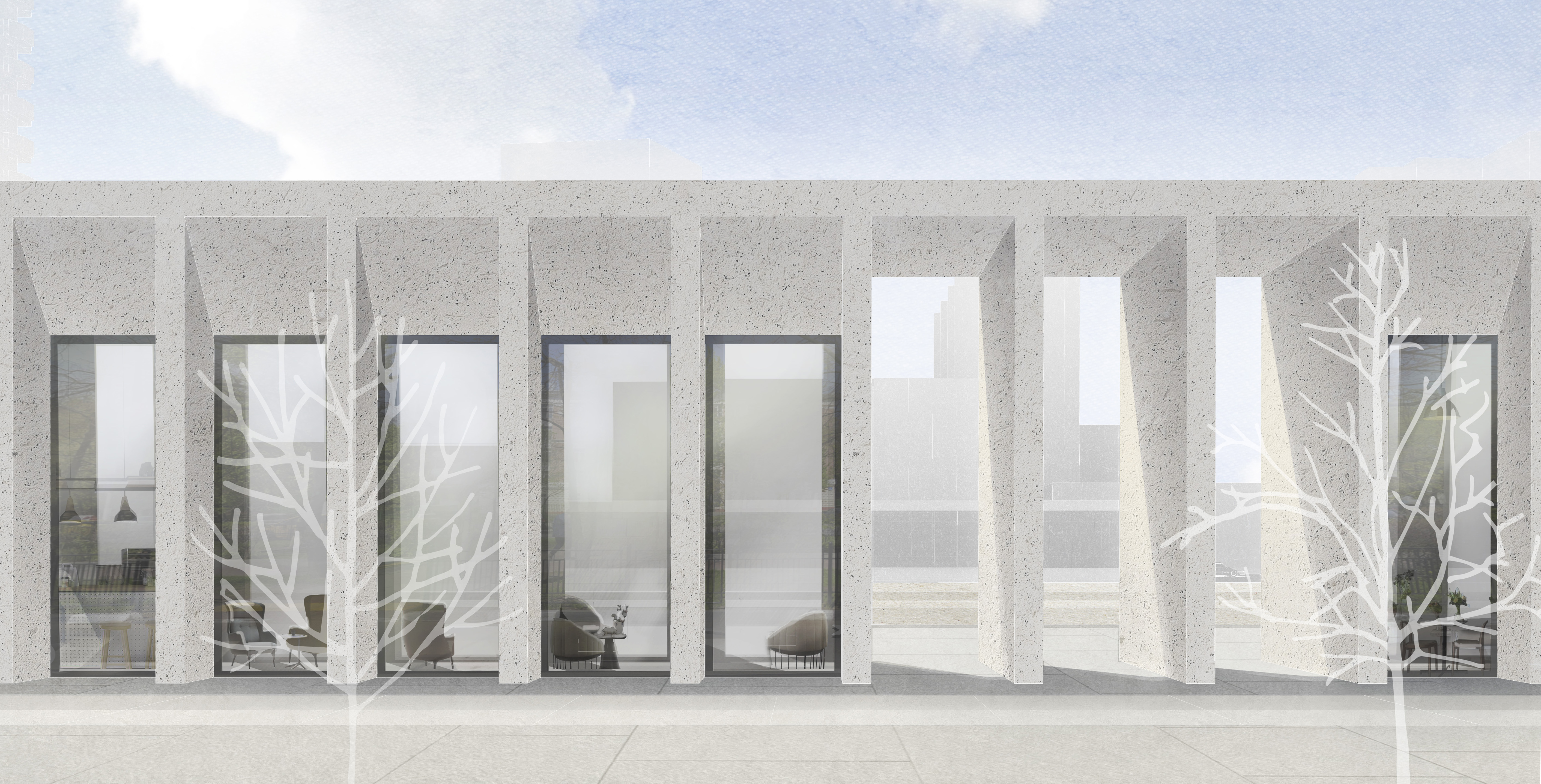